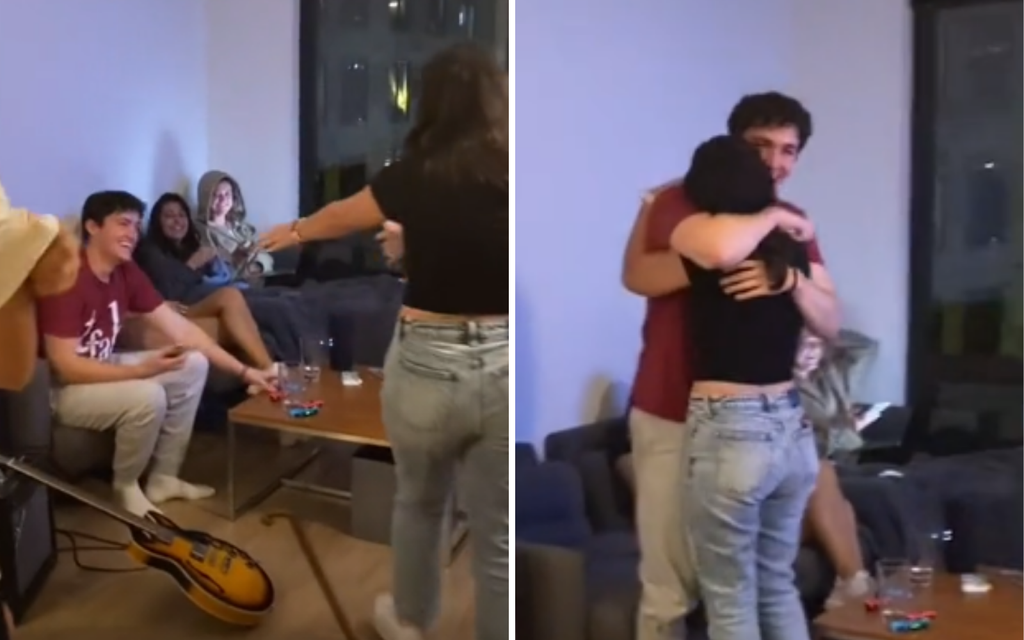 A TikToker who surprised her boyfriend at college has been forced to defend their relationship after viewers claimed his reaction was a red flag.

TikToker @laurenzarras posted a video in which she surprised her boyfriend at his apartment, where he was with six of his friends. When he first sees her, he smiles and doubles up before hugging her. It has received almost 17,000,000 views and nearly 1.8million likes since its posting.

The TikToker was excited to see her boyfriend, but some of her audience didn’t seem so convinced.

Another user whose comment racked up 8,000 likes wrote: “I’ve never seen someone so unhappy to see their girlfriend.”

Others slammed him for not getting up immediately, with some pointing out that the girl sitting next to him seemed to scoot over once she entered the room.

Several people also commented saying they believe they spotted the girl beside him “sneakily” giving him back his phone.

Not all of the comments criticised the relationship however, with one user writing: “All the girls in the comments talking about him sitting with other girls is giving me not secure in their own relationship vibes lol.”

Another user said: “Y’all need to realise that loyal men exist and confidence woman exists aswell. Ya’ll jus’ showing your own insecurity in the comments.” [sic]

The TikToker replied to several comments defending her relationship before pinning a response reading: “Breaks my heart that people can watch a special moment and bring so much negativity. Please think before you assume anything about my relationship.”

In a second comment, she added: “As for the phone comment, his phone was in his lap. Thanks for the concerns though! And no I’m not in denial.”

Several TikTokers stitched the video giving their thoughts on her boyfriend’s reaction:

Some people called for the “hate” to stop:

In a follow-up video, she replied to a comment reading: “Am I tripping or did the girl hand him his phone under his arm as she walked in? His face says it all.”

She said people are “driving her crazy” over the phone comment, and shows a frame-by-frame view of him with the phone in his hand.

She also said she knows all the girls in the room and “they are all so nice.”

She added: “These comments are just getting ridiculous and I don’t know why you guys are assuming so much about our relationship. I’m so happy and we’ve been doing distance for over a year now. My boyfriend and I are literally obsessed with each other and are in contact with each other every minute of the day.”

Although she seemed to have dispelled the phone theory, the top comment with 97,000 likes reads: “BRUH… I remember being this naive.”

In her latest video, she seemed to take aim at the relentless commenters by posting an audio snippet where Kourtney Kardashian tells her sister Kim to “mind her business.”

Regardless of how much she tries to defend their relationship, some commenters don’t seem to be letting it go. Although you can draw subjective conclusions based on someone’s perceived body language, it is a little harsh to criticise someone else’s love life based on an innocuous 19-second video.

We know the man who can help her if things go south and she decides to end it all.

Previous articleI’m 29 and a mum-of-eight boys
Next articleCeleb spotting! Who are the NFL’s most famous fans?