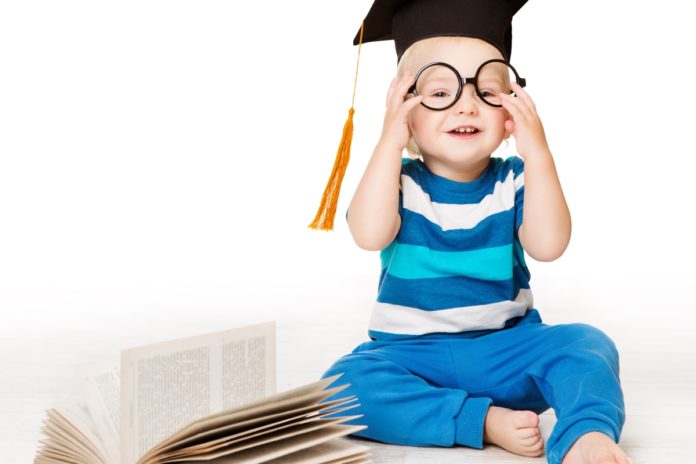 WE all want our children to grow up to be a genius, right?

You want them to become geniuses as soon as possible.

Robert C. Titzer is an American professor and infant researcher who claimed to create an approach to teach babies written language, which resulted in the Your Baby Can products.

Titzer’s focus is on learning and he shared his top tips with Fabulous about how to make your child a genius.

Robert said: “What the parents do in the earliest months is crucial.

“If you want your child to do really well later, you have to do a lot in the first two years of life.

“There is research from Stanford University that found that babies think at different speeds based on the language environment that they are in in the first 18 months of life.

“The main advice I would have is to teach your baby language skills as early as possible, because that not only will affect how quickly the baby will think but they also affect the child’s vocabulary and language skills which tend to end up being very stable.

“Language scores at age two predict reading scores at age 15, so if you teach your child a lot of language skills early on, then they are very likely to be good readers, more than a decade later.

“If your focus is on helping the child do well I would focus from birth through to age 5.

“90% of the brain is developed by age 5, I recommend about 90% of all the parents’ effort to their childs’ education to be done by age 5.

“What they have learned by age 5, if they know early reading and early maths at the highest level they can, this will predict their future learning.

“If they are going to do well in the future they have to be doing well at age 5.”

And don’t worry, you don’t need to go out and spend hundreds of pounds on toys or games.

Dr Robert suggests some toys to purchase but he also suggests parents make their own toys.

Dr Robert recommends a cot mobile kicking exercise to try when your child is very young.

He said: “There’s research showing that if you make a baby’s environment more interactive, then the baby learns more. This is called responsiveness.

“You want to start these activities very early on.

“The babies have virtually no control over their environment so any way you can make the environment responsive, then it’s better for the baby, because the baby figures out contingencies, in other words, if I kick my right leg, then this will happen etc.

“What I did was I connected the mobile to my own babies’ ankles by using a piece of cloth and gently putting it on the baby’s ankle.

“With this, the baby figures out when they kick, the mobile moves. They can figure this out very quickly.”

If you’ve got any balloons lying around, Dr Robert has a great activity you can play with your baby.

Dr Robert said: “I also came up with an idea of connecting balloons that have helium in them to a baby’s leg and arms, using cloth (of course you have to be super careful, make sure they aren’t wrapped too tightly).

“Parents love this because the babies can control their own environment.

This activity can be done at any age, and babies will soon learn that if they move their arms and legs, the balloon can be moved.

“These kinds of toys are the best ones early on.

“They are called responsiveness activities.”

Dr Robert recommends that right from the very beginning of a child’s life, it is important to teach special thinking, mathematical thinking and concepts related to these things.

He said: “One way of doing that – once the baby is able to control their heads – they should have a walker, where they can move around (make sure you baby-proof your home before using a walker).

“When using the walker, the baby can figure out how to get to different places around the home.

“There is research to show that babies that use walkers have better spatial thinking skills than the babies who do not use walkers and the earlier they can do that, the better.”

We’re all taught from a child that reading is important, but Dr Robert thinks reading is key to a child’s development.

He explained: “I recommend teaching the baby language skills and reading as soon as possible.

“Reading books on many different topics is one of the best ways to expand the child’s vocabulary.

“There is research showing that if babies haven’t learnt some syntax by 12 months of age, they will not learn it at a high level, ever.

“I recommend early literacy sliding books, which are specifically designed to teach reading.”

Who would have thought that introducing your child to Tetris would make them a genius?

He said: “Another activity which people may be surprised I recommend is Tetris.

“I recommend doing that very early on.

“There are so many positives to doing it – it is really good because you have to do a lot of 3D kinds of things and rotating things and also speed is important.

“You want the children to get really fast with things and make quick decisions because that is a skill that can be developed very early in life and the longer you wait, the harder it is to develop.”

While the majority of us can probably only speak one or two languages, Dr Robert recommends teaching your child many languages, from a young age.

He advises: “There is now research showing that it’s better to learn multiple languages simultaneously from birth, instead of teaching English first and then later introducing other languages.

“I recommend introducing at least 4 languages and one of them to be Chinese.

“If you want to learn Chinese, do not wait until your child is five and then start, which is what most parents do nowadays.

“There is research showing that the brain develops more efficiently if you are learning multiple languages simultaneously from birth.

“The brain develops in a much more efficient manner if you learn multiple languages simultaneously.

“If you don’t do it early on then the child will not learn at his or her potential.”

If you want to introduce your child to some games, Dr Robert recommends Rush Hour.

He said: “I also recommend this game called Rush Hour.

“It is a logic game, there is a giant traffic jam, you have to figure out how to move the vehicles so the cars can get out of the traffic jam.”

Building blocks seem to be quite a staple toy and one that Dr Robert recommends.

He said: “I recommend using lots of blocks.

“There is one called smart max building blocks – there is more flexibility for the child to come up with more 3D-building with these.

“They are magnetic so they hold together better.”

Dr Robert emphasises the importance of teaching your child maths concepts at a young age.

He suggests: “There are lots of maths toys, but to me the most important thing is in the first two years, for the parents to use all of the maths words – teaching them the concepts before they go to school is the key.

“Talk about the concepts right from the beginning and the baby can figure it out.

“Roll a die, step forward and backwards based on the number you get, this will teach your child numbers, as well as negative numbers.

“There are lots of games that teach maths but most of them are not until the child is 4 and by then a large proportion of the brain is already developed.

“So if you really want to do it, before the child is 2 you need to be introducing the concepts.”

Now here’s where you can put your drawing skills to the test.

Dr Robert said: “When my daughters’ would get a gift I wouldn’t just give them the gift, I would make them work a little bit to get the gift.

“One thing that I did was early in life I would draw their room or take a picture of their room and put an X by where I hid the gift.

“Then you would show them the picture and they have to go and find the gift.

“Then you could expand this map to include your entire home and hide the gift in different rooms and they have to figure out where the gift is.

“You keep on expanding it, if you have a garden you can make the map bigger and once they learn this you can also make a map of your neighbourhood.

“Once they get that concept of your house and the neighbourhood, then you can do your town or city and they will actually understand what’s going on.

“You keep expanding it to your county, country, continent and eventually to the globe so they can learn a lot about something representing something else.

“You can use north, south, east and west if they can’t find the gifts or right and left, depending on what they need to learn.”

Being active is great for a child’s development but it might come as a surprise that sports are also great for developing your child’s language skills.

Dr Robert said: “Introduce your child to many different sports as then their vocabulary will expand very rapidly.

“They will also be able to learn what they enjoy so give them many different options and their interests will develop.”

Who doesn’t love a bit of music?!

Dr Robert recommends that you intrude pitch and musicality early on.

“Between the ages of 4 and 7 the percentage goes down, after the age of 7, no-one has learned it in any controlled study.”

So… it’s not going to be easy if you want your child to be a genius, but if you follow Dr Robert’s tips, you’ve got a good chance your child is going to excel!

If you were fascinated by Dr Robert’s expert tips, he’s speaking at The Baby Show which returns to Olympia London 22nd – 24th October.

Meanwhile, a mum shares clever hack for getting her fussy child to finish their dinner & adults are saying they want it too.

Also, a baffled mum begs for help with five-year-old son’s homework after puzzling over it but everyone’s saying the same thing.