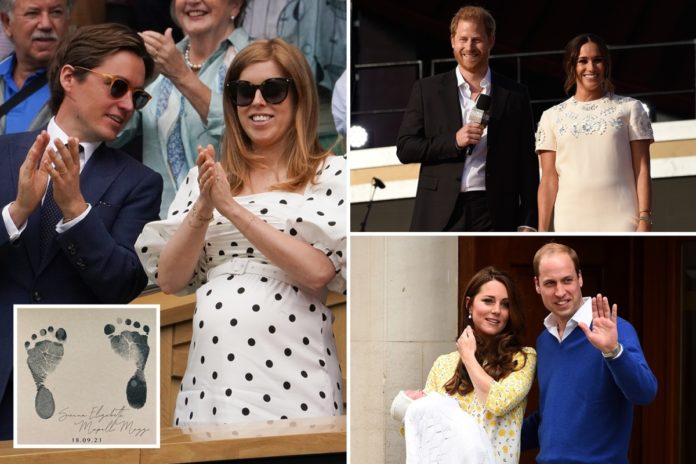 PRINCESS Beatrice announced the name of her baby, a subtle nod to Queen Elizabeth. But she’s not the first royal to do this.

The Queen’s granddaughter gave birth to her first child on September 18 and gushed she was “delighted”At the new arrival.

She wrote the following: “We are delighted to share that we have named our daughter Sienna Elizabeth Mapelli Mozzi.”

FABULOUS BINGO: GET A £5 FREE BONUS WITH NO DEPOSIT REQUIRED

Sienna’s initial name derives from the Tuscan city Siena and is clearly a reference to her fathers Italian roots. The middle name of the baby is in honour of Queen Elizabeth II.

This is Queen Elizabeth’s 12th great-grandchild. It arrives just over three years after Lilibet Diana (Harry and Meghan’s second child), whom they also named after the Queen.

🔵 Read our Royal Family live blog for the latest updates

Named after Harry’s grandmother Princess Diana, she was also named after her family’s nickname.

Her full name, which includes her title, is Princess Charlotte Elizabeth Diana Of Cambridge.

Charlotte’s grandfather, Prince Charles, is Charlotte’s first name. However, her middle names Elizabeth and Diana pay tribute to the same women Lilibet was named after.

Plus how Meghan Markle’s royal comeback shows she has a ‘new steely determination’It is now ‘resilient’Follow Megxit.

The green-fingered Queen plant a tree to commemorate Platinum Jubilee, as she returns to Charles’s office after summer break.

Charles and Camilla appear on the red carpet with Prince William, Kate Middleton, and Prince William for the premiere of Bond film No Time To Die