Vivo, A Sony Pictures Animation Studios Musical Coming to Netflix in a week!

Animation movie fans assemble! Because, this week is going to be more colourful and joyous with yet another Netflix release from Sony Pictures Animation, “Vivo“. Being the first-ever musical movie from Sony Pictures Animation, “Vivo” is one of a kind with a celebrated team of directors, writers, producers, and artists behind the gratifying comedy movie.

Excited to know more about Vivo? Here we have everything you need to remember about the latest animation/ musical movie addition on Netflix. Read on for details about the release date, plot, cast, and crew of Vivo. 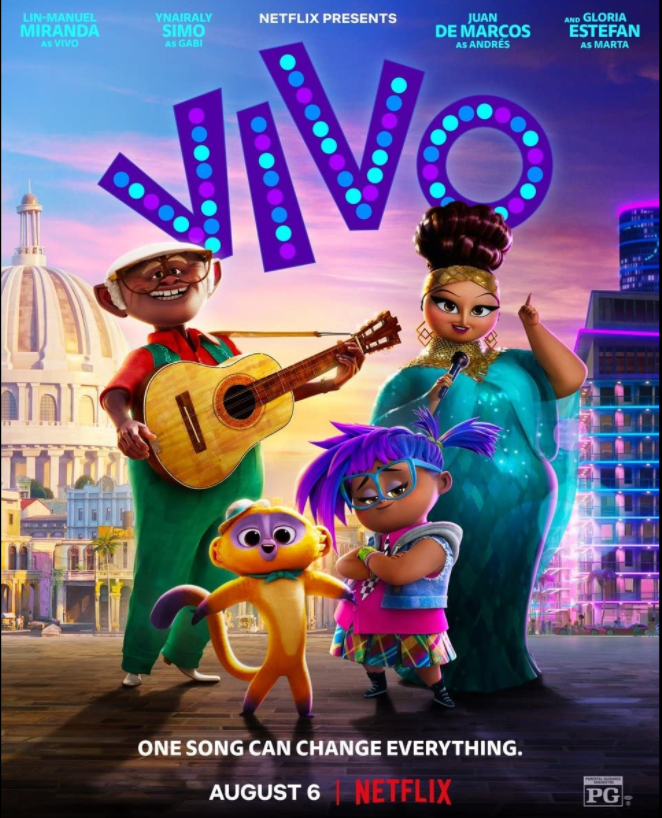 When it comes to heartwarming musical animations, Netflix never fails to deliver. Together with the Sony Pictures Animation studio, we got some brilliant movies like “The Mitchells vs The Machines” and “Hotel Transylvania”. This time they have for us a treat to our eyes, ears and soul. Just like the tagline of Vivo that says “One song can change everything”, the musical adventure presents originals from the illustrious singer, songwriter and actor, Lin-Manuel Miranda, best known for his Broadway musicals “In the Heights” and “Hamilton”. The musical will take you away through an epic journey that traverses through friendship, passion, love and adventure.

This kids and family movie will be hugely embraced by the kids as Vivo features a special rainforest honey bear, a kinkajou named Vivo. Vivo, like most of our favourite animated animals, is a performer. He plays music with his loving owner Andrés. Things take a turn when a letter arrives for Andrés from his old singing partner and now a sensation in the music industry, Marta Sandoval. To fulfil Andrés’ deep longing of letting Marta know he loved her, Vivo sets out on a mission to deliver her a song Andrés wrote for her. Vivo unexpectedly gets accompanied by Andrés’ grand-niece, a cheerful little girl named Gabi, who is inspired by his mission and helps him find the way to Marta.

When is Vivo coming to Netflix? It’s this week! It’s only a few days until the 6th of August when Vivo will finally be released digitally. Having been delayed several times owing to different reasons, Vivo premiered in selected theatres marking its theatrical release in July 2021. Days later, the musical will be released on Netflix on August 6 2021.

Vivo comes from the renowned director Kirk DeMicco, best known for his work, “The Croods” and Brandon Jeffords, remarkably noted for his work in “The Mitchells vs the Machines”. Vivo has a spectacular cast who have given life to the characters of the musical by voicing them including Lin-Manuel Miranda (Vivo), Ynairaly Simo (Gabi), Juan de Marcos González (Andrés), Gloria Estefan (Marta) and Zoe Saldana (Gabi’s mother, Rosa) among others.

How excited are you about this delightful musical adventure releasing this week on Netflix? Enjoy the trailer of Vivo and stay with us for updates on more entertaining watches.

Previous articleTop 5 Most-Awaited Netflix Releases For August 2021
Next articleResort To Love Movie Review: Is The Netflix Original Worth The Watch?