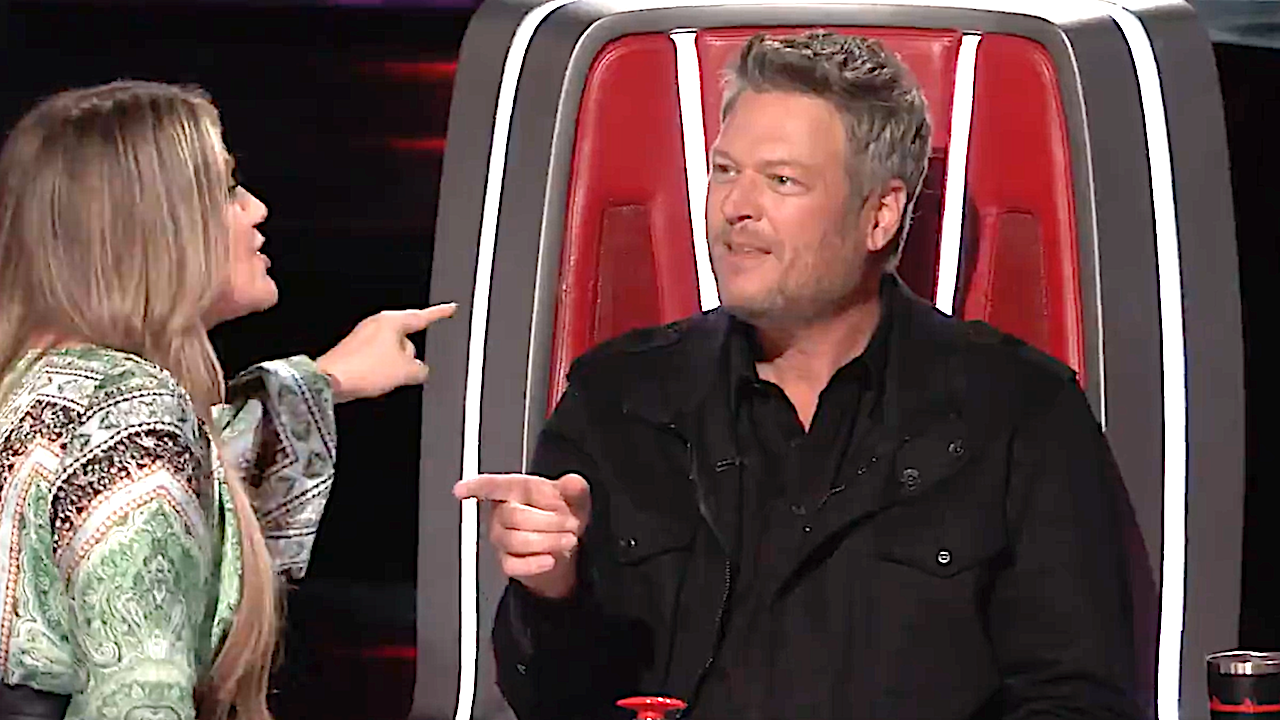 A lot has been made of good-natured feuding that occurs between The Voice‘s four coaches. Carson Daly, who’s hosted the singing competition for all 21 seasons, even said the banter is part of what has given The Voice its longevity, as it approaches its 500th episode. Blake Shelton and Adam Levine’s feud was so hilariously potent that we’re still talking about it two years after he left the show. And while viewers may have thought Ariana Grande would fill that rival role, it appears as if Kelly Clarkson has stepped up instead.

Fans are loving the way Kelly Clarkson has spiritually taken up Adam Levine’s cause of putting down the resident cowboy in his place. In fact, Clarkson has proven such a worthy opponent, this rivalry might be even better than the original — with one small change.

Why The Voice Fans Love The Blake-Kelly Feud

Before Kelly Clarkson joined The Voice in Season 14, Blake Shelton didn’t really have any competition in choosing contestants whose focus was solely country music. Clarkson changed that, and she didn’t just hold her own against Shelton — she started winning. Clarkson won Season 14 with pop singer Brynn Cartelli, and Season 15 with Chevel Shepherd, marking the first country artist not on Shelton’s team to win The Voice. Clarkson won again in Season 17 with country singer Jake Hoot.

Ariana Grande even pointed out in the Season 21 premiere that while Blake Shelton does indeed have the most wins on The Voice with eight in 20 seasons, Kelly Clarkson actually has a better winning percentage, with 3 out of 7 wins for 43% to Blake’s 40%. Adam Levine, in comparison, had 3 wins in 16 seasons for a 19% win rate. Fans love that Clarkson doesn’t just bring the banter; she backs it up with results and a beaming smile.

There’s nothing I love more than watching Blake and Kelly argue.🤣 https://t.co/Wvv0YtmOXKSeptember 21, 2021

Also, Blake Shelton and Kelly Clarkson are friends in real life, and their rivalry wouldn’t be as fun if they weren’t having a good time. Clarkson, who recently split from husband Brandon Blackstock, has been open about leaning on her Voice co-workers through the bad times and celebrating the wins with them. And while nobody wants to see Shelton grind away at Clarkson’s abundant positivity, the fact that they’re friends makes it even more amusing when she shows real frustration toward his antics, with Shelton always a baby-step away from Troll Mode. Which leads me to precisely what The Voice needs to do to keep their competitiveness watchable.

What The Voice Needs To Avoid Doing With Kelly And Blake

Can we all agree that The Voice‘s authentic feuding is far more interesting than moments that feel planned specifically to engage viewers? When Kelly Clarkson and Blake Shelton started fighting about whether having experience outside of country music was a positive or negative, the argument went on so long that Ariana Grande and John Legend actually walked off stage. As the bickering continued, Legend and Grande were seen enjoying some popcorn backstage before eventually relenting and returning to their chairs. Twitter users loved that part, as the latter two coaches acted out what everyone at home was thinking.

Ariana Grande and John legend having a popcorn break while Blake and Kelly had an endless argument is my mood rn pic.twitter.com/T3t6XN45uqSeptember 26, 2021

It was a great bit, sure, but absolutely one that shouldn’t be replicated just because it worked once. The general ribbing between the coaches is so watchable because it’s authentic, or at least it feels that way. If the reality show starts spicing up broadcasts with pre-planned arguments, it’s going to get really old, really fast — as did the rivalry between Blake Shelton and Adam Levine toward the end. The amount of fighting between Shelton and Kelly Clarkson has already started to grate the nerves of some viewers.

Take away a lot of bickering between Blake an Kelly and it would be better!! https://t.co/SWGQiGGLp1September 23, 2021

As hard as it can be to make metaphorical lightning strike twice, one might thinking creating an artificial lightning machine would be a great idea. But once TV execs start taking away the unexpected and start trying to guide what fans are interested in, that’s when things can get far more tiresome to sit through. Which is something we never want to say about a Kelly Clarkson appearance in any capacity.

The Voice‘s finalized Season 21 teams are well on its way to being formed! Tune in to NBC Monday at 8 p.m. ET as the Blind Auditions continue. Be sure to check out our 2021 Fall TV Schedule to keep up with all of the upcoming premiere dates.

Previous articleWith its new function, the iPhone 13 has beaten every smartphone on the market, even Samsung.
Next articlePeople Cheat Due to Unexplored Fantasies