Selfridges Host Their First Ever Wedding for an Essex Couple

Selfridges was the host of the first-ever wedding in London when an Essex couple got married in a secret ceremony.

Carlene Noel, 40, and Danny Sains, 47, who live together in Billericay Essex, wed on Saturday, joined only by the bride’s son Carnell, 10, and the groom’s daughters Nancy, 12, and Lola 13. 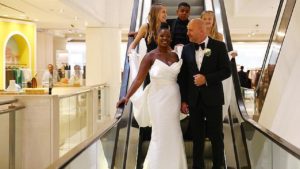 Their wedding was kept secret by Mr. and Mrs. Sains. They only called their families and close friends to inform them that they were getting married

The PA news agency reported that Mrs. Sains said: “I got a bit emotional when I told my mum because then it felt real and she just broke down, she said she is really happy.

“We just thought we want it to be us and our children, it is our day and it’s very easy to get carried away and there is nothing wrong with that, but we just wanted to keep that intimate feeling, and what better place than Selfridges.”

Mr. Sains said: “I had never been to this Selfridges until last Christmas and I fell in love with the place, and she loves it.

“I pushed Selfridges for Carlene and after we went for it, it turned out we were the first wedding so it just worked out perfectly.”

Mrs. Sains runs her own personal styling and shopping business, Carlene’s Closet, and Mr. Sains is due to open his own pie and mash business called Sainsy’s next week in Brentwood, Essex.

Selfridges acquired a wedding license in May 2021 allowing weddings to be hosted at its Grade II listed store on London’s Oxford Street.

Before the cake was cut, there was a choreographed dance performed by the couple and their children to Candy by Cameo.

A newly designed wedding suite was hidden behind a fourth-floor black curtain. It featured slides of the couple and a center table with gold-framed photos and flowers.

It can hold up to 20 people. There is also a bar, couches, and a clear view of an altar that is placed in front of a glass.

After the wedding, the family was taken on a personalized tour of the store, including shoe shopping, followed by lunch at the Brasserie of Light before cocktails and a private screening of Grease at one of the store’s three cinemas screens.

Rebecca Warburton, director of events and customer experiences, Selfridges, stated: “We are delighted to have hosted the first wedding at Selfridges today, and are thrilled that Carlene and Danny chose to celebrate their special day with us.

“It has been a very special day for everyone at Selfridges, too.”

Selfridges offers three wedding packages – earth lovers, a sustainability-focused option; all-out extraordinary, with a ceremony officiated by a drag queen; and just the two of us, a small wedding which was this couple’s choice.

Previous articleRaven Gates posts 20-week baby bump on social media, will she reveal the gender?
Next articleWoman Froze in Shock When She Opened a Huge Suspicious Box Delivered to Her! True Story