Irate Passenger Claimed That She Was Kicked Off Alaska Airlines Flight For Wearing “Inappropriate” Crop Top!!

A woman recently imposed several allegations on Alaska Airlines. She quoted that the authorities “harassed” her and she was escorted off the flight because of her dress. 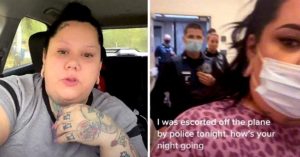 Ray Lin Howard, a rapper, who is popular by the name Fat Trophy Wife, recently stormed the Internet issuing some serious allegations against Alaska Airlines. She claimed that on August 4, the staff kick her off the flight due to her crop top, which was deemed “inappropriate.”

She revealed the complete matter through a TikTok video, which was captioned, “Alaska Air flight attendant harassed and called the airport police on me for my inappropriate outfit.” 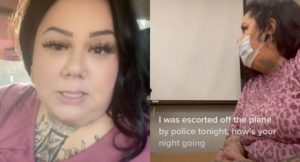 In the clip, Howard was featured having a conversation with Alaska Airline’s police, when she was escorted off the flight.  She revealed that her outfit was not that “inappropriate” as she was simply wearing a sports bra and black leggings. However, when she was requested to put her shirt on, she may have denied it. But, later she obliged and add a pink high-necked crop top. However, the attendant was still not satisfied. She walked back to her and said, “Your belly is showing, so you can’t wear this. Its “inappropriate.”

Later Ms Howard also revealed that she justified herself and said, “I said, I am covered up, I am completely fine, but the attendant kept going. I said, ‘If you are going to kick me off, then kick me off. I have done what you wanted. So just leave me alone’.”

She also claimed that the behavior of the flight attendant was unbearable and she approached her over three times, pointing out her outfit. This matter ignited the hype on social media. While Howard’s conversation with the police clearly points out that she had not committed any criminal offense. But she had surely violated the Airline’s rules on dress codes. 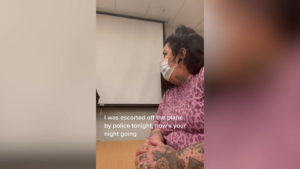 A spokesperson for Alaska Airlines countered the claims of the woman and said, “We are in contact with the visitors. We are committed to detecting what happened wrong and taking the appropriate actions against it. It is our primary goal to offer caring service to every guest. When we don’t live up to that aim, we do everything we can, to make things right.”

Previous articleAngelina Jolie shares the Rare pictures of her children doing home Work
Next articleBeyonce is expecting her fourth child.