Did Courteney Cox break her vow to never getting cosmetic fillers again? One tabloid claims the Friends alum isn’t aging naturally. Here’s what we found after taking a close look at the rumor.

This week’s edition of the Globe reports Courteney Cox is back on cosmetic fillers after claiming to have given them up back in 2019. Cox shared an Instagram video recently that raised concern among fans. One commenter said, “You don’t even look the same. The stuff you did is overkill and it doesn’t look right.”

The tabloid consulted a cosmetic surgeon to weigh in on the matter. “It does appear Courteney has undergone injections of filler into her lips to plump them up, and Botox into her forehead and frown lines to smooth them. I also suspect that she’s had some filler injected into her cheeks,” The doctor said so.

The outlet asserts that Cox’s face has been “ruined” by fillers. An insider dished, “She was on a real kick a couple of years ago, adding more and more fillers to her face, and friends said, ‘Don’t go overboard.’ 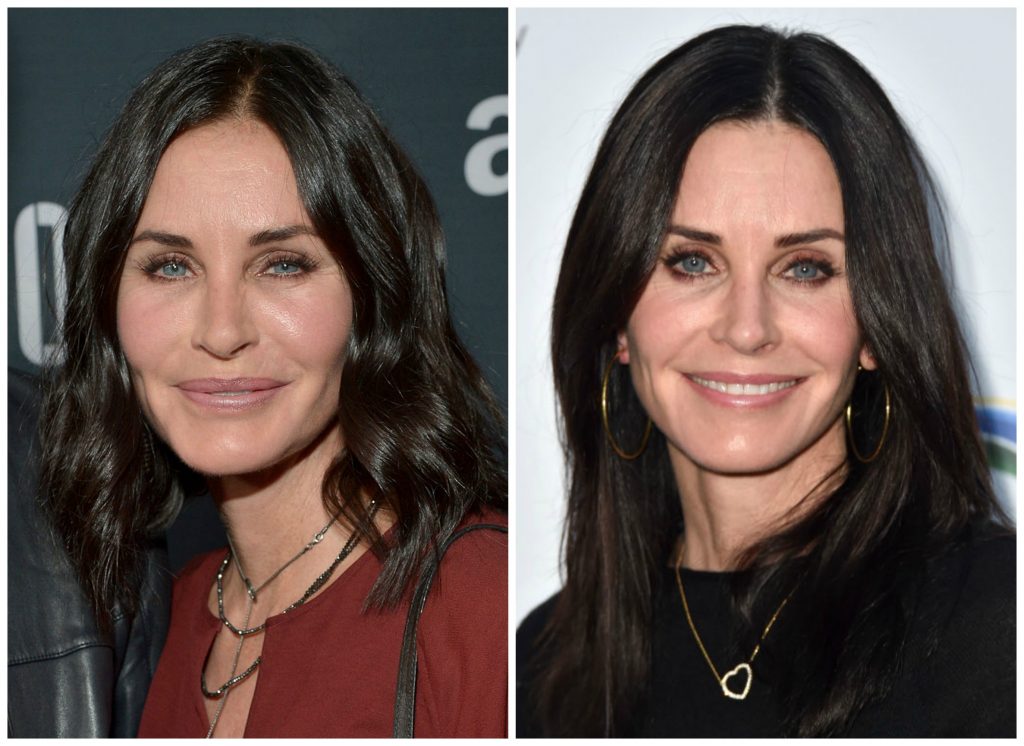 But it was too little too late by the time she finally listened,” adding, “She looks so different. Her cheeks seem misshapen, her lips are gummy, and, of course, the fear is her filler overload has done permanent damage!”

After looking into the claims, we found the tabloid’s story to be confusing and shameful. First of all, Cox says in the video that she didn’t even realize she had her hair wrapped in a towel while showing up to work. It’s low to make fun of her appearance when she admits she hadn’t even finished getting ready.

And Cox’s “misshapen” cheek the tabloid claimed was proof is clearly where a loose strand of hair obstructs her face. The full video shows her cheek looking perfectly normal.

But it’s strange the tabloid is suddenly sounding alarms about Cox’s appearance. The actress admitted in 2019 that she had gone too far with the cosmetic treatments. In an interview with People, she said, “[I tried] to keep up with time in a way that was anything other than maintenance.

I didn’t realize it until one day I kind of stepped back and went, ‘Oh [expletive]. I don’t look like myself.” Cox’s fillers are old news, and there isn’t any evidence to suggest she’s had any work done since. In that video, she doesn’t look any different than she did in this photo taken back in April, so what is the story here?

This tabloid apparently takes stories from Instagram trolls. Besides, most of Cox’s fans didn’t see a problem with her appearance in the video. The comment section was flooded with compliments, and it’s hard to find a single negative word among them. It’s obvious this magazine is the only one obsessed with whether or not Cox is getting work done.