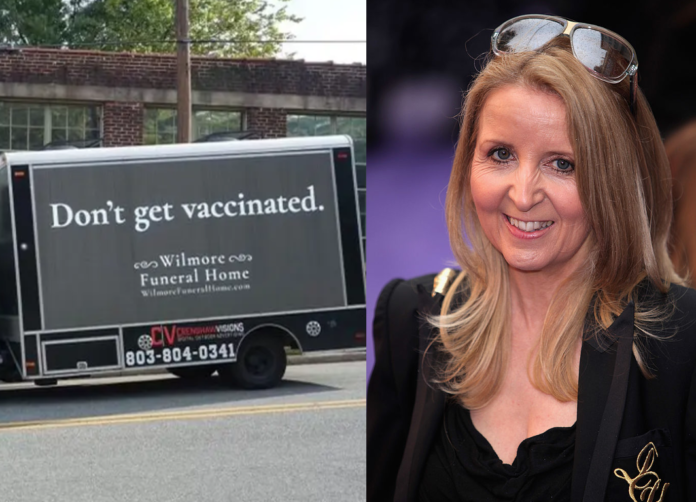 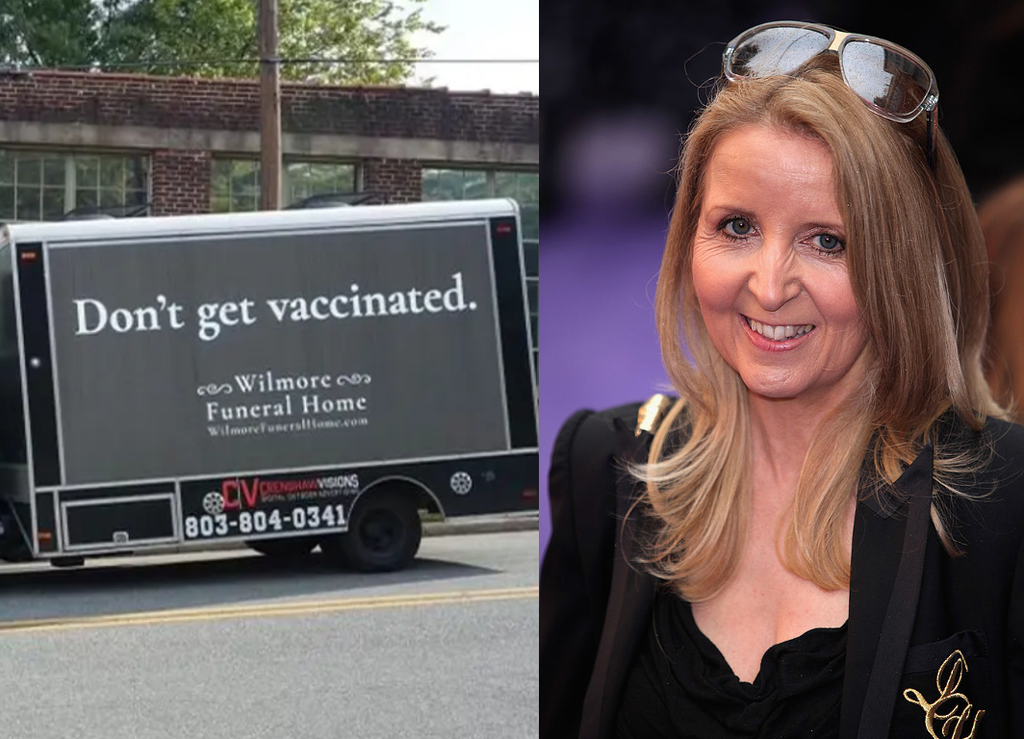 Covid conspiracy theorist Gillian McKeith’s attempt to push her anti-vax views has beautifully backfired because she didn’t do some basic research.

Posting on Twitter, the TV nutritionist who used to dig through people’s poo to promote pseudo-scientific ideas about diet for a living, shared an image of a van with an advert for a funeral on its side, saying “Don’t get vaccinated.”

“The funeral director knows something …… are you listening?” she asked.

But McKeith doesn’t know “something”. The van and advert, which was spotted in Charlotte, North Carolina over the weekend is actually a stunt to persuade people to get vaccinated to deal with a poor vaccine take-up in parts of America.

Indeed, visitors to the fake “Wilmore Funeral Home” website are redirected to a landing page instructing them to “Get vaccinated now” along with a message that says, “If not, see you soon”. The ad agency, BooneOakley, said they wanted to make an advert that “shocks people”.

“I just feel like conventional advertising is not working. Like, just regular messages that say ‘Get the Shot’ or ‘Go Get Vaccinated’ … they just kind of blend in with everything else,” agency director David Oakley told CNN. “We wanted to do something that saw it from a different perspective and kind of shocks people into thinking, ‘Holy moly, man.’”

But it appears McKeith missed this message, and thought that a funeral home was actually warning people that if they get vaccinated they will die, and not the opposite as a fake way to tout their business.

She was, of course, accordingly roasted:

It is not the first time that McKeith, who agreed to drop her former “Dr” title in 2007 after her academic credentials were called into question, has behaved in an absolutely barmy way when peddling her coronavirus nonsense. In the summer, she tweeted a bizarre acrostic, reading: “Certificate Of Vaccination I D,” adding: “Truth is always in plain sight,” suggesting that Covid is a hoax to get people doubled jabbed.

She also frequently campaigns against vaccine passports and has called getting the vaccine a “medical experiment” for some reason.

McKeith stopped playing with poo on TV a long time ago, but clearly, she is not yet done with bulls**t.