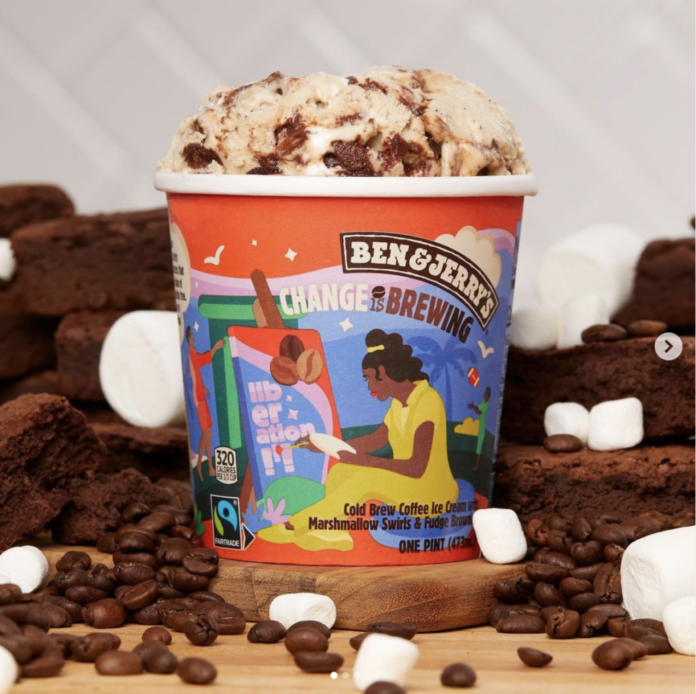 Ben & Jerry’s has managed to do it again, creating an exciting, new ice cream to join its existing flavors on a mission. Similar to other impactful flavors, Ben & Jerry’s latest ice cream, Change is Brewing, is more than a frozen treat.

In a partnership with black-owned businesses, Ben & Jerry’s revealed its new flavor is made with cold brew coffee ice cream blended with marshmallow swirls and rich fudge brownies.

As part of its efforts to support the People’s Response Act, proposed by Rep. Cori Bush, D-Mo., Ben & Jerry’s unrolled its unique flavor to combat the disproportionate share of police violence against Black and Brown people.

Putting its weight behind the legislation, Ben & Jerry’s declared, “It’s time to divest from systems that criminalize Black communities and invest in a vision of public safety that allows everyone to breathe free.”

In addition, Ben & Jerry’s will donate a portion of the profits from the limited-time flavor to a “grassroots group working to transform public safety in America.”

The Scoop On The New Flavor

Also featured on the “Change is Brewing” pints is an intriguing package design by Black artist Laci Jordan. The Los Angeles-based artist’s design reflects a powerful, yet joyful vision of true public safety.

In a recent Instagram post, Jordan talks about her experiences working with the Vermont-based ice cream brand. In her view, the Ben & Jerry’s collaboration was one of the most “exciting, collaborative projects” she’s worked on to date.

Moreover, Jordan shared that, “When starting the project, [she] was asked to think about what a world free from injustice would look like. [She said she wasn’t] gonna lie… initially, it was hard; [she] didn’t want to be literal or create art rooted in suffering. [She] ended up focusing on what [she] thought that world would feel like… love, joy, freedom, Black liberation, and the unapologetic space to exist without worry.

With a scoop of the limited-edition flavor, “Change is Brewing,” you can also celebrate safety and liberation for all. “Change is Brewing” is available at participating Ben & Jerry’s Scoop Shops. Or, indulge at home with a tasty pint!