By Amy Comfi
September 15, 2021
In
EntertainmentCelebrities
Ben Affleck and Jennifer Lopez were recently in Venice, Italy, but they didn’t leave the country without first finding themselves at close range with an overly eager fan. It has been reported that the couple was at the airport on the way to catch their flight when a bearded man came out of nowhere and aggressively tried to take a picture with them. 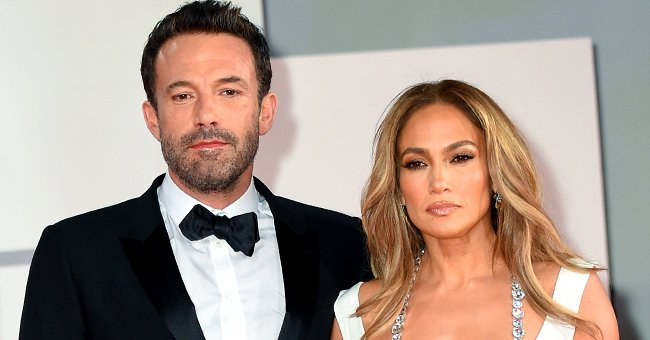 Affleck was quick to react and was able to keep the man at a safe distance from Lopez, who just stood there watching as her boyfriend pushed the amateur paparazzi away. The security team accompanying the power couple immediately intervened putting some distance between the man, whose identity is yet to be revealed, and the stars.

The incident took place just one day after Affleck and Lopez made their first major red carpet debut in over 15 years at the 2021 Venice Film Festival.

The last time they were spotted together at such an event was all the way back in 2003, when they attended the premiere of “Gigli,” the film in which they portrayed the roles of Larry and Ricki.

Affleck and Lopez drew a lot of attention to themselves at the ceremony, with the actor looking particularly dapper in a black Dolce & Gabbana tuxedo and a pair of shoes by Christian Louboutin.

As for the 52-year-old singer, she went for a white mermaid-style gown with a deep V-neckline designed by Georges Hobeika, complementing the look with a Cartier bracelet and Jimmy Choo heels.

The couple seems to be very much in love and it has been reported  they are “the loves of each other’s lives.” The lovebirds even have the approval of Affleck’s best friend Matt Damon. According to the “Good Will Hunting” star, Affleck is the best and deserves every happiness in the world, adding that he is “glad for both of them.”

Previous articleWhy Is Britney Spears On A Break From Instagram?
Next articleTLC Release Date For Save My Skin Season 3 & Everything We Know