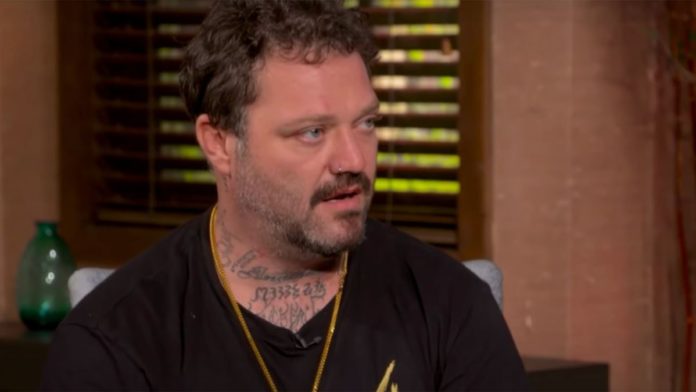 Bam Margera is a guy who’s had a tough time of late. The former Jackass stuntman won’t be seen when Jackass Forever debuts, a move which led to a lawsuit against his former colleagues. It all stemmed from an alleged violation of an agreement that Bam remain sober, and now Bam Margera is reportedly celebrating his birthday while in rehab.

It was recently reported that while in Florida Bam Margera clashed with police after being reported as being “emotionally distressed” at his hotel. Rather than being arrested or charged with any crime, Bam was apparently taken to a rehab facility. That happened all of two days ago, and then yesterday, Margera posted an image to Instagram in celebration of his own birthday, which seems to make reference to his recent incident, with an indication that he is trying to see the positive side of things.

It’s unclear just where Bam Margera is right now. If he was taken to a rehab facility he might very well be wishing himself a happy birthday from there. But unless there’s a court order or some other mechanism holding him there, he likely would have the ability to leave on his own, so he may have done so.

All this comes on the heels of Bam’s sobriety being at the center of the reason he was not included in the newest Jackass movie. Bam reportedly signed an agreement which promised he would remain sober through the film’s production. He is said to have violated the deal, which led to his removal from Jackass: Forever. Margera has since filed a lawsuit against the producers, including Johnny Knoxville, claiming he was forced into signing the agreement.

The fate of the lawsuit is unclear at this point. There were some rumors that the suit was the ultimate reason that Jackass Forever had seen its release date delayed, but it appears that it was just the good old fashioned pandemic that’s to blame for that decision.

Those aren’t even the only legal issues that Bam Margera is currently dealing with. There’s a restraining order filed against him by the director of Jackass Forever as a result of the conflict between the two over the film. And more recently Margera has needed to deal with child custody drama as his wife, Nicole Boyd, has apparently filed for full custody of their son, despite not filing for divorce.

Whatever is going on with Bam Margera personally, he’s certainly seen a great deal of hardship over the last year or so. Hopefully, whatever help he truly needs he will get, and perhaps with this new birthday he can find a way to start over and resolve these various conflicts in a way that will work for him.