Jimmy Hoffmeyer, the father of a 7-year-old biracial kid, has filed a lawsuit against his daughter’s school for giving the girl a haircut without consent.

A seven-year-old biracial girl, Jurnee Hoffmeyer, in Mount Pleasant, Michigan, suffered a devastating encounter in March at the hands of her classmate and two school teachers.

On March 24, the little girl lost most of her previously long curls after a classmate forcefully gave her a haircut with scissors as they made their way home on the school bus. The dad admitted he was infuriated but decided to chalk it up to childish shenanigans. 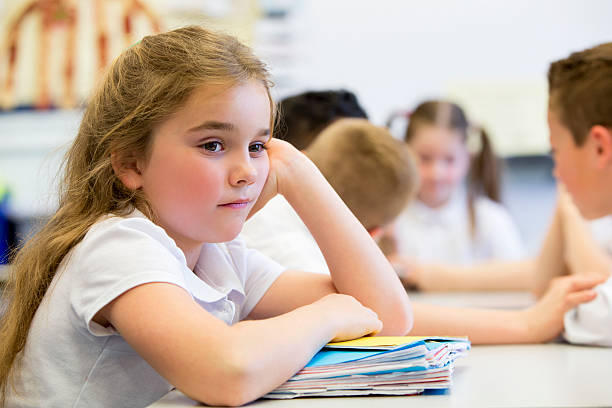 Jurnee is sad after classmates and teachers cut her hair in school.

To even out the embarrassing sight of the unprofessional cut, the furious dad, Hoffmeyer, took his daughter to a beautician. Jurnee ended up with an asymmetrical cut, which was a convenient way to salvage the situation.

However, after only a few days, two of the little girl’s teachers replicated what the classmate had done earlier, this time trimming off all her hair and leaving her scalp exposed.

Upon getting home, the sight of the elementary school girl in tears infuriated her dad, who tried to confront the staff at the school.

A hairdresser was cutting someone’s hair.

When all his questions went unanswered, with the school refusing to provide footage of both incidents, he proceeded to withdraw his daughter.

The father accused the librarian of cutting off his daughter’s remaining hair with Jacobs’ assistance. Like the classmate before them, the defendants perpetrated the act without the permission of Jurnee or her parents, making it a violation of Jurnee’s constitutional rights.

A hairdresser was cutting someone’s hair.

The defendants’ conduct amounted to deliberate indifference, according to the lawsuit. The suit also described their actions as “obdurate” or “Wanton.”

Mogg and Jacobs and the school district face charges for violation of the Fourteenth Amendment, deliberate indifference-violation of due process, and the plaintiffs’ constitutional rights as per the lawsuit.

The school board maintains that neither of the staff involved acted with ill intention, nor were their actions spurred by racial bias. They resolved to retain Mogg’s employment following a third-party inquiry, placing her on a “last chance” agreement.

In a statement, the board disclosed that all staff members involved have apologized for their lapse in judgment. Amy Bond, President of Mount Pleasant Public Schools Board of Education, described the allegations as baseless, vowing to defend their stance in court aggressively.

Jurnee is hardly the first student to endure such treatment at the hands of a teacher. In 2018, the video of a high school teacher forcibly cutting a male student’s hair in front of the class as other students fled to evade her went viral, sparking outrage.

Margaret Gieszinger, the teacher at University Preparatory High School, Visalia, ended up losing her job. Additionally, she faced up to 3 and half years sentence on six misdemeanor charges.

Such incidents have necessitated implementing the National CROWN Act in all the states to protect potential victims of such actions.