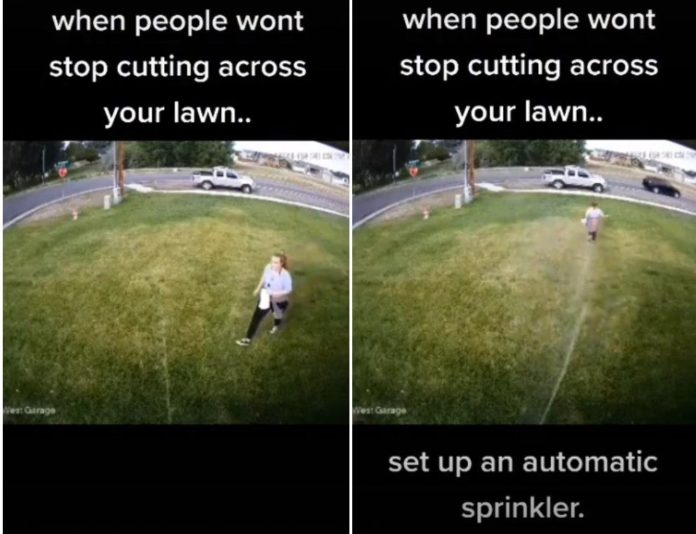 Some people take serious pride in looking after their lawn, but one man’s way of maintaining his patch from being ruined by trespassers has divided TikTok.

Thomas Lyons (@tgunz81) posted footage from a security camera that points directly onto the lawn, and the on-screen text reads: “when people won’t stop cutting across your lawn…”

A trespasser then appears as she walks across the lawn, but when she gets to a certain area, her movement triggers a sprinkler alarm which drenches the woman – who can be seen running off the lawn for cover.

Another clip shows two kids walking through the lawn, a decision they would also come to regret as the two trespassers were also soaked when the sprinklers turn on, and they too pelted off the grass.

Proving that taking a shortcut isn’t always worth it…

It seems the TikToker found the two clips amusing as he played upbeat music while the trespassers were confronted by the sprinklers.

The video has sparked a debate as to whether or not it is right to punish strangers in this way for walking on someone’s lawn.

Some people disagreed with spraying people with water for crossing the lawn, and argued that it’s “just grass.”

“Never understood why walking on the lawn is such a bad thing. It’s grass,” another person said.

“These are school kids, you could just put a stone path [on the lawn], it’s just grass, kindness means so much more,” a fourth person replied.

On the other hand, many argued as long as it is the person’s lawn, they can therefore do whatever they want on it- whether that be soaking trespassers.

One person wrote: “I LOVE this level of pettiness. It’s your lawn so do as you wish.”

“I don’t understand. I was raised never to walk in someone’s yard, especially a strangers,” another person said.

“Y’all are mad for no reason. This is THEIR yard. Walking on it can kill the grass and there are sidewalks for a reason,” a fourth person replied.

After a debate was ignited in the comments, the TikToker uploaded a follow-up video to show what would happen before the sprinkler was installed.

Basically, it meant that more people or “lawn pirates” would trespass across the lawn and Thomas explained in the caption how he “asked nicely every day to stay off the lawn but people just keep coming.”

So, next time you’re thinking of taking a shortcut, you might want to weigh up whether it’s worth being caught in a sprinkler shower.