Perfect Reply Of 36-Year-Old Mom, Shamed About Looking Much Older!!

A TikTok user named Clare Dudley’s slams the netizens who troll her for her appearance, taunting that she looks much older than her real age. 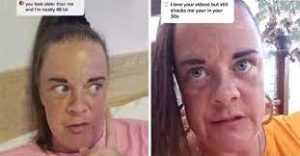 Everyone loves to be beautiful with age. However, taunting someone for his/her looks is not acceptable. But, still, there are some Internet users who love to criticize others to satisfy their ego.

Recently, Clare Dudley, a 36-year-old TikToker, fell into the clutches of the toxic netizens, who started criticizing her for their physical appearance. They stormed her account with comments claiming that she looks much older than her actual age.

Most TikTok users left comments on her videos, being surprised that she is only 30, but her looks portray her as a 50 to 60 years old woman.

While many netizens were criticizing the woman, the mother too joined the party and claimed that they look much younger than Dudley, but are really older than she is. However, some users started passing extremely harsh comments.

Though a storm of rude remarks hit Dudley, she seems to be unbothered, and the woman chose to take a stand. He hit back at those who know to be mean and selfish.

In tons of TikTok video, she even took to the comment section to individually reply to the harsh comments. She said, “Show me a picture of you without any makeup or filter and then come to me. Until then, please just shut up. Have a nice day.”

Many people liked her comment. However, the TikToker did not reveal how many users reach out to her with their no-makeup look. 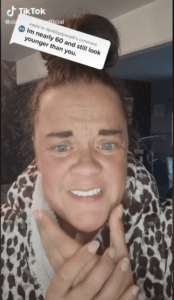 Her replies were equally savage and hurting for the users. In a video, Dudley passed an insane reply to Susan, a TikTok user. She said, “I have just had a look at your photo and I am not being so funny, that’s filtered, isn’t it? Come on, Susan, that’s definitely a filtered picture, and my mother said in that photo you looked her age, and she is 60.”

Apart from the wave of negativity, Dudley also enjoys active support from the TikTok community. One of her regular viewers commented, “We can put an incredible filter on but what I love about Dudley, is she never does!! Because she is real hun xx I mean why are they obsessed with age!!”