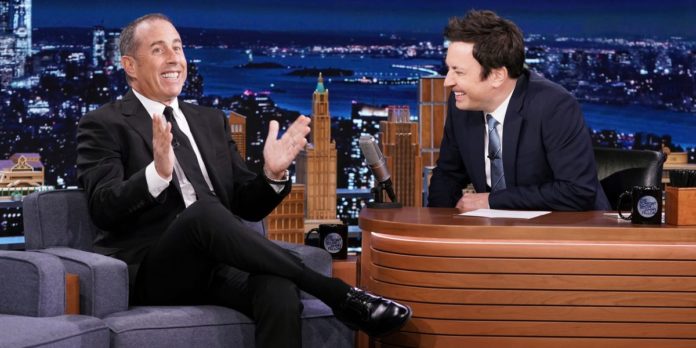 Jerry Seinfeld apologized for his part in writing a bizarre interspecies storyline in the 2007 children’s film “Bee Movie” on Saturday.

Netflix
, the 67-year-old comedian brought up his past work on the Dreamworks Animation flick he co-wrote and produced.

In recent years, some viewers have questioned the close relationship between the “Bee Movie” protagonists, a human florist named Vanessa Bloome (voiced by Renée Zellweger) and a honey bee named Barry B. Benson (voiced by Seinfeld).

Seinfeld seemed to have caught wind of the conversation, or at least seen the memes, about what some consider to be the early stages of  an interspecies romance.

“I apologize for what seems to be a certain uncomfortable subtle sexual aspect of ‘The Bee Movie,’ which really was not intentional. But after it came out, I realized, ‘This is really not appropriate for children.’ Because the bee seems to have a thing for the girl, ” the stand-up comedian explained to host Jimmy Fallon.

He added, “We don’t really want to pursue that as an idea in children’s entertainment.”

The team behind “Bee Movie” has previously addressed the strange relationship between the two characters in the 14 years since the movie’s premiere.

On the film’s 10th anniversary in 2017, director Steve Hickner told The New Statesman that Barry and Vanessa were “never going to be sexual or anything like that.”

“It was purely this friendship… maybe in Barry’s mind he thought… but it was never going to be that,” Hickner said.

Barry Marder, a “Bee Movie” script writer, acknowledged that the film’s concept is “kind of weird to begin with” during his interview with the outlet.

Fellow writer Spike Feresten found that viewers are either “entertained or repulsed” by the storyline. He clarified that there is no real “interspecies love affair” in the movie, noting that they didn’t want to “sell” that idea to young viewers.

Feresten attributed any murkiness in the Vanessa-Barry dynamic to the fact that the writers subconsciously separated the characters from their physical form while crafting the script.