By Tom O'Brien
May 21, 2022
In
EntertainmentCelebritiesUSAViral

The “Downton Abbey” saga continues in the sequel film “Downton Abbey: A New Era,” which finds the cadre of characters coming up against Hollywood itself when a film production sets up shop at Downton.

After six series on television, creator Julian Fellowes took his upstairs/downstairs story of the goings-on at a sprawling English estate to the big screen with the aptly titled 2019 film “Downton Abbey.” The story continues to unfold in the sequel, “Downton Abbey: A New Era” which takes place in 1928 – nearly two decades after the series first began.

Given the popularity of the show and now film franchise, many may be wondering what kinds of viewing options are available for “Downton Abbey 2” and when or if it might be streaming. Everything you need to know about the new film is outlined below. 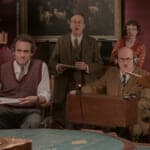 Is “Downton Abbey: A New Era” in Theaters or Streaming?

The sequel opened exclusively in theaters in the United States on May 20, courtesy of Focus Features. As of opening weekend, “Downton Abbey 2” is not available to stream – but that won’t be the case forever.

“Downton Abbey: A New Era” is expected to be streaming on Peacock 45 days after it hits theaters, so around July 4. It will likely be available to rent or own VOD before that, if it follows the release pattern of fellow Focus Features film “The Northman,” which was released On Demand just three weeks after it hit theaters.

But no official streaming or VOD date for “Downton Abbey 2” has been announced just yet.

What Is “Downton Abbey: A New Era About?”

The story of the sequel follows two different tracks. On the one hand, a filmmaker has arrived at Downton to use the estate as the backdrop for his new silent film. At the same time, the Crawley family learns that the Dowager Countess has inherited an estate in the South of France from a man she knew in the 1860s. Some of the family members then travel to France to uncover this mystery of the Dowager’s past.

Who Is in the “Downton Abbey 2” Cast?

Where Is the “Downton Abbey” TV Show Streaming?

You can stream all six seasons of “Downton Abbey” on Peacock and Amazon Prime Video.

The 2019 film is streaming on Peacock and FuboTV. Sophy Ridge tells Tory MP in an intense interview that she “doesn’t understand her answers”.

Sophy Ridge tells Tory MP in an intense interview that she “doesn’t understand her answers”.