Giant Baby From ‘The Masked Singer’ Causing Nightmare | Who Could It Be?

During The Masked Singer Season 6, Episode 2 viewers met the giant baby. Viewers quickly took to social media to describe this costume as “nightmare fueling.” Even host Nick Cannon admitted he would be having dreams about the baby tonight.

The giant baby’s segment kicked off like everyone else. See the costume. Judges react to the costume. Viewers and judges watch a short clip getting to know the baby. Clues are dropped. Then, the baby performs.

Initially, it was shaping up to be a pretty rough performance as that baby voice didn’t carry tunes very well. But, once the baby stepped out of the playpen it was like the mic dropped. The voice changed completely. Suddenly, this was a baby that could carry a tune!

After the baby walked out on the stage, the judges asked what was wrong with the people responsible for the costumes this season. The general consensus beyond the baby being terrified and nightmare-inducing was simply that the baby was also HUGE.

As MEAWW reminds us, the giant baby is actually the first human costume to be introduced in six seasons. Up until now, viewers have been used to colorful and abstract costumes or costumes of some sort of animal or object. The giant baby costume, however, didn’t really capture the “cute” factor a person expects when they hear the word “baby.” 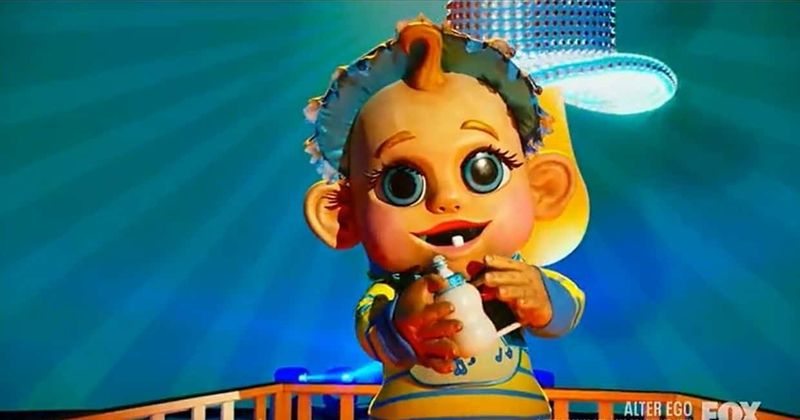 So, it isn’t too surprising the costume wasn’t well-received. That, however, doesn’t mean the internet thought the baby was a bad singer. More importantly, the horrifying costume sure seemed to leave a mark on how memorable it was.

The Masked Singer Spoilers: Who is the baby?

The Masked Singer viewers at home have already started to guess who might be behind the baby costume. According to Good Housekeeping, there have been a lot of impressive guesses thrown out there.

Some of the guesses thrown out there include:

Gold Derby reports Larry The Cable Guy makes the most sense. Larry was the voice of Mater the tow truck in the Disney series Cars. Some of Maters’ shortcomings seemed to mesh well with the clues that were dropped during the episode.

Previous articleLatinos Continue to Be Underrepresented in Media Jobs, Federal Study Finds
Next articleWoman Terrified After Finding Hidden Tracker On Her Car