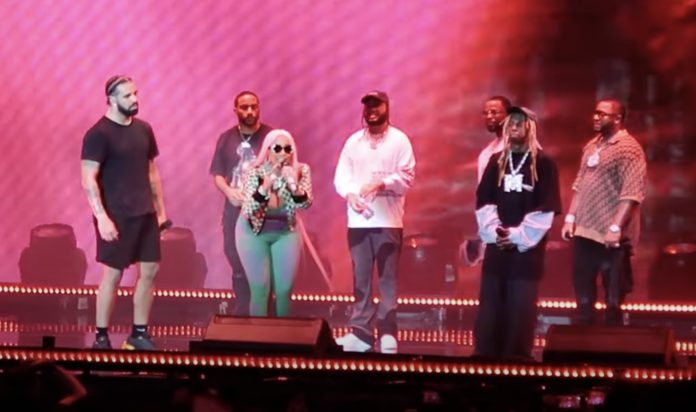 Drake held a Young Money reunion with Lil Wayne and Nicki Minaj Saturday night in Toronto as part of the rapper’s October World Weekend shows. It was the first time in eight year that the former label friends appeared onstage together.

The concert — which had been delayed one week after Drake tested positive before the original date — opened with some levity as the video screens stated “Unfortunately, Lil Wayne had some troubles at the border. Luckily, Drake runs the border.”Lil Wayne performed a set of hits that included Young Money appearances.

“When you’re at the top, and you always remember your motherfucking family, that shows your character,”Minaj spoke of Drake. “One of the most duplicated, imitated rappers in the world.”

Young Money, Lil Wayne’s imprint of the Cash Money label, launched both Drake and Minaj to stardom. All three rappers, as well as other artists on the label, appeared on three Young Money collective albums, the last one being 2014’s Rise of an Empire.