When Gabby Petito makes it to the news and necessary action is being taken to find her, Why isn’t the same action taken for Missing Indigenous people aren’t. Why?

The story of Gabrielle “Gabby” Petito has swept the country.

USA TODAY. The New York Times. The Washington Post. Fox News. CNN. The nation’s major news outlets have all covered her life and dissected her “van life” videos on social media, produced timelines around her disappearance, analyzed police bodycam footage and reports, and devoted daily coverage to the ongoing search for her fiancé Brian Laundrie.

The case is a magnet for amateur sleuths. The #GabbyPetito hashtag has generated hundreds of millions of posts on TikTok, where true crime-obsessed users have shared updates – some true and others not – and shared their feelings about the case.

The national attention to her case has stirred public outrage – and that’s only grown since her body was found Sunday at a campground near Grand Teton National Park in Wyoming, and Laundrie ditched Florida police who have to search all week for him inside a “vast and unforgiving” wilderness park.

We all have a unique perspective:  Sign up for This is America, a weekly take on the news from reporters from various backgrounds and experiences.

While Petito’s case continues to unfold under the glare of the national spotlight, thousands of Indigenous people remain without justice.

Isn’t it worth their lives?

In a study that surveyed 71 U.S. cities, the Urban Indian Health Institute in 2016 found there were 5,712 reported cases of missing or murdered Indigenous women and girls. A 2016 National Institute of Justice report found that more than 4 in 5 Indigenous people had experienced violence in their lifetimes.

In Wyoming, where Petito’s remains were found, 710 Indigenous people were reported missing between 2011 and 2020.

The disproportionately high rates of missing and murdered Indigenous people is a nationwide crisis, and experts say Montana is an epicenter. According to a state Department of Justice report, indigenous people in Montana are four times more likely to go missing than non-Native people. As of Sept. 15, Indigenous people accounted for 31% of the state’s active missing persons population, though they comprise about 6.7% of Montana’s population.

Everyone is talking about Gabby Petito. They’re having the wrong conversation, experts say.

In the eight days when Petito’s family reported her missing on Sept. 11 and when her body was found on Sept. 19, three Indigenous people – Sterling Prinze Redstar, Markie Shea Williams, and Cloelle Buck Elk – were reported missing in Montana.

However, most people don’t know their names.

The disparities in Petito’s story and thousands of missing Indigenous cases are evident in media coverage, public interest, and search efforts.

“Missing White Woman Syndrome,” a term coined by Gwen Ifill, a former longtime PBS news anchor, refers to the idea that the amount of media coverage a missing person receives is directly tied to their demographics and background.

Zachary Sommers, a sociologist, and criminologist, in 2016 analyzed missing person’s news coverage from CNN, the Minneapolis Star Tribune, the Chicago Tribune, and the Atlanta Journal-Constitution. He discovered that missing persons of color were significantly underrepresented while missing girls and women of colour were overrepresented in news coverage.

“As a culture, we readily identify with white folks and white individuals who are victims,” Sommers spoke to the Great Falls Tribune of USA TODAY Network. “So we see a white person go missing in a few news stories, and we think, ‘That could be my cousin or that could be my friend or my co-worker or my brother or my sister.’

“Whereas, we may have different connotations or associations with people of color. None of this has to be explicitly stated. These are all implicit perceptions we might have due to structural racism in this nation.”

Sommers said the consequences of Missing White Woman Syndrome are serious. More media coverage on a missing person case can place increased pressure on law enforcement, leading to justice in these cases. He also said the disproportionate media attention is harmful, implying that some lives are more important than others.

But Sommers made clear that all missing person cases deserve coverage.

“It’s unquestionably a positive thing that Gabby’s case got coverage, and Missing White Woman Syndrome and research on it does not suggest otherwise,” he said. “It’s just saying that we need to expand the pie. It should not be just the Gabbys in the world that get this coverage. This shouldn’t be an all-or-nothing game. We must do more to expand coverage.”

Indigenous people call for change: ‘We get treated like we aren’t human.’ 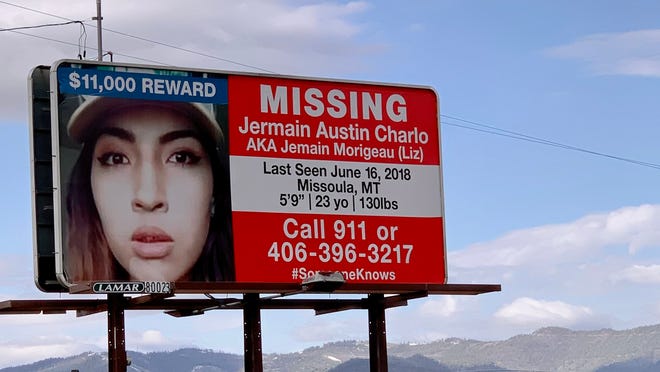 The Indigenous justice organizer for the ACLU of Montana, Angeline Cheek, said the disparate media coverage is “proof of the racial inequality we have in the U.S.”

“It’s always been that white people are put on a pedestal. We are treated as if we’re not human by the way we treat Indigenous people. It sends a message about how important their lives are to Indigenous youth. Our voices are never heard,” she said.

Kimberly Loring HeavyRunner, whose sister Ashley has been missing from the Blackfeet Reservation since 2017, said the national media attention directed at Petito does not surprise her.

“This is normal when it comes to media coverage. Everybody who goes missing is valuable, but this is a reality for Indigenous people. I don’t know how to get this type of mainstream media coverage. This kind of attention is not possible for me. Gabby’s family got this attention, and I am happy for them. I don’t feel bitter; I feel that we need more change,” she said.

Candace Lowe-Zamora, a member of the Coyote Valley Band of Pomo Indians, has a feeling she knows how to “qualify” for national media coverage.

“If I go missing, describe me as blonde hair (and) blue-eyed (sic),” she tweeted on Monday. “Wearing a brown wig with brown contacts. Maybe that will help find me faster.”

When Indigenous people go missing, Lowe-Zamora said there appears to be a tendency within the media and law enforcement to blame the victim.

“They always focus on something negative – like, ‘Were they on drugs or drinking alcohol?’ And then they say, ‘Well, they shouldn’t have been doing this or that.’ But with Gabby, she was just treated as a victim, as she should be,” Lowe-Zamora told the USA TODAY Network. “It just seems like being blonde and blue-eyed is more acceptable in the media.”

Do you know where they are? 43 missing person cases the FBI needs help solving

“It saddens me because what does this say about our value in life? We, as Native women, are mothers, daughters, grandmothers, sisters, and aunties. Our lives matter just as much as anyone else’s,” she said.

“Why aren’t they reporting our women when they go missing or are murdered? Is it because we don’t look like the typical American girl or how people envision America’s daughter? We want that same energy when our women go missing.”