Celebrities aren’t that different from common folks, at least when it comes to playing “Wheel of Fortune.” They solve their puzzles one guess at a time.

That’s the verdict from Pat Sajak and Vanna White, legendary hosts of the longtime syndicated game show, who return to primetime for Season 2 of ABC’s “Celebrity Wheel of Fortune” on Sunday (8 EDT/PDT).

As with regular contestants, the celebrities “were very excited to be here. You forget that they sit at home like everyone else and watch the show. They were (going), ‘Look, there’s the wheel! There’s the puzzle! Here comes Vanna!’ That was fun to see,” Sajak says.

Neither White nor Sajak, who appeared together via Zoom on the “Celebrity Wheel” set during tapings in May, would single out the best – or worst – star players, but they were impressed with the performances overall.

They’re here to stay:Pat Sajak and Vanna White to stay on ‘Wheel of Fortune’ through 2024

“I was really surprised they did as well as they did,” White says. “It’s kind of out of their comfort zone. Although they’re familiar and comfortable with cameras, they’re up there playing a game. They don’t want to look bad. They had a good time. It was fun.”

Sajak’s answer when asked if they have any A-listers in mind for the next season is not surprising, but it is surprising.

“My secret desire is to get Meryl Streep on the show, just because I want to hear her say, ‘Come on, Big Money!’ ” He says. “I think that would be really dramatic.”

Although the competition remains the same, there are some structural differences with the 60-minute celebrity edition, which is a half-hour longer than the weeknight syndicated version that Sajak, 74, and White, 64, have helmed since 1983.

“One of the reasons you do it with celebrities is you want to have some time to interact and have some fun and not just play the game,” Sajak said. “In that sense, there was more goofing around and entertainment value, but they approached (the game) as seriously as any of our players.”

“Wheel,” along with its usual time-slot partner “Jeopardy!,” has long been a top syndicated ratings performer, but it also stirs up a lot of interest on social media, which results in news coverage whenever something unusual occurs. That’s happened a lot this year, as when Sajak disqualified an answer because the contestant added the word “and,” when he accidentally mentioned a puzzle answer as a contestant was trying to solve it, and when White was hit in a confetti-cannon misfire.

Sajak defends the “and” decision: “You hate to do that but if you start saying it’s OK to add a word there, then why isn’t it OK to add a word somewhere else and where do you draw the line?” The accidental puzzle answer “was not a big deal because I’ve often maintained that nobody’s listening to me.” That may be the case, because the contestant missed the revealed answer: “Quite frankly.”

TV:Vanna White ‘whacked in the head’ by confetti blaster after historic win

As for the cannon misfire, White acknowledged that “it could have been” a more serious matter. “I survived.”

In the past, Sajak has disallowed answers because of small deviations in wording and has accidentally blurted out parts of puzzle solutions, but such irregularities have resulted in more attention in the age of social media, he says. News stories often follow, proving “Wheel” is “pretty good clickbait.”

“Apparently, (“Wheel”) gets a lot of people talking,” he says. “It’s sort of a compliment to us, that they think we’re something people want to hear about.”

Sajak and White, who recently signed a contract extension for the syndicated program through 2024, avoid getting too specific when asked how long they plan to continue selling vowels and turning letters. Sajak humorously jumps on an awkwardly phrased question.

“When you say, ‘How long do you want to keep going?,’ do you mean as hosting the show or in the eternal sense?” He asks.

After that gets resolved, he becomes reflective, acknowledging “we’re much closer to the end than we are to the beginning.”

“There’s a pretty good chance that when one of us leaves, we’ll both leave, because it would be odd for either of us to work with somebody else,” he says. “I always say that I want to leave while the show is still popular and before people tune in and say, ‘Ooh, what happened to him?’ 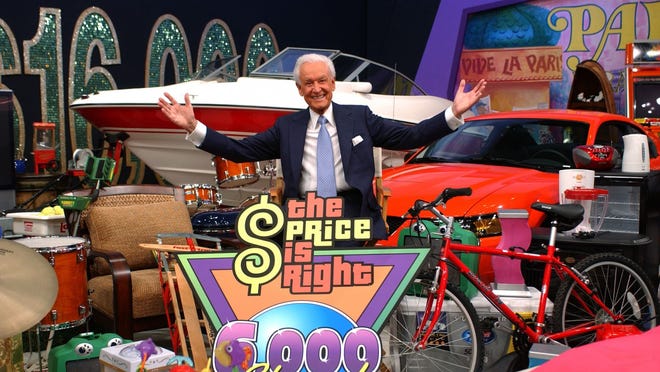