What is the True Meaning Of Dreamcatchers? 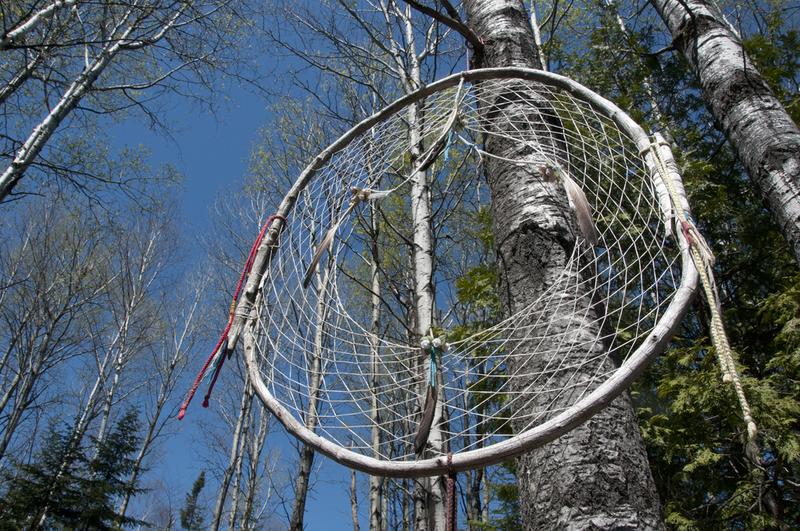 Dreamcatchers are very fashionable home decor pieces these days, but do you know about their roots? They’re much more than a trend—they’re sacred, spiritual tools with a rich history. Before you decorate your home with one of these beautiful handmade pieces in your bedroom, learn about the true meanings of dreamcatchers, their ties to Native American culture, and what to consider before purchasing one.

The History Of Dreamcatchers

According to the non-profit organization Native Languages of the Americas, dreamcatchers were first created by the Ojibwe (otherwise known as Chippewa) tribe. They were Anishinaabe members and inhabited the current areas of southern Canada and the Midwest United States.

The Ojibwe were known for many inventions, including hammocks and snowshoes. They also invented the dreamcatcher. The tiny, handcrafted creation served as a protective charm for sleep. According to legend, bad dreams and negative energy were caught in the talisman so that they could not reach the minds of sleeping children.

This wasn’t the only nighttime ritual they practiced. The Ojibwe believe that an individual’s spirit spends four days walking towards a final resting place after death.

“He doesn’t know it, but if he gets lonely, he may take someone with him,” says Dan Jones, Ojibwe language instructor at Fond du Lac Tribal and Community College.

They feared that babies and young children were particularly vulnerable to being taken, Ojibwe smudged charcoal on youngsters’ heads before bedtime. They believed that it would protect them against wandering spirits.

“When the spirit sees the charcoal, [the face] is blurred, and he can’t see who it is,” Jones explains.

Frances Densmore, an ethnographer and the author of the 1929 book Chippewa Customs, explained that dreamcatchers resembled spiderwebs. Its sole purpose was to trap bad energy. A small hole in the center of each dreamcatcher also served as an entry point for pleasant dreams to reach the child’s mind.

The Continued Evolution Of Dreamcatchers

As intermarriage among different tribe members increased over time, dreamcatchers also became a tradition among the Lakotas. This tribe even had its own origin story to the charm.

According to historical documents (via the Aktá Lakota Museum), Iktomi—a wise trickster who appeared in the form of a spider—came before a spiritual leader in a vision. It showed him spinning a web of willow, feathers, horsehair, and beads.

“Use the web to help yourself and your people…to reach your goals and make use of your people’s ideas, dreams and visions,” Iktomi said to the man. “If you believe in the Great Spirit, the web will catch your good ideas, and the bad ones will go through the hole.”

Craftspeople now make dreamcatchers of a multitude of tribes, including the Cree and Cherokee. While they aren’t necessarily longstanding traditions among all Native American people, they are now a shared symbol linking these Indigenous communities.

What Dreamcatchers Are Made Of

According to Densmore, dreamcatchers were initially being meant to be hung on the hoop of a cradleboard. They were constructed of three-and-a-half-inch willow hoops, shaped in circles or teardrops. The rounded frame represented the circle of life.

The inner web was made from a nettle stalk cord. Fibers were dyed with bloodroot or wild plum inner bark for color. The design, reminiscent of a spiderweb, “trapped” bad dreams and energy before they could reach the sleeping child below.

Feathers were more than a frivolous embellishment—they served as a ladder for good dreams to gently land in one’s mind.

Dreamcatchers have changed over the years. In recent years, it’s not unusual to see the addition of beads, which symbolize good dreams. Sometimes, gemstones replace feathers, and arrowheads provide extra protection for the child.

Unfortunately, the sudden popularity of dreamcatchers means that most of the ones you’ve seen on the market are inauthentic. Mass production means they are often made with inferior materials: cheap balsa wood for hoops, nylon thread in place of cord made of natural fiber, synthetic feathers dyed in garish colors, etc.…

A massive dreamcatcher hanging on a living room wall might look pretty in a Pinterest pic, but items like these do not serve their intended purpose by any means.

“[Dreamcatchers] has become the symbol of unity among Indian Nations and a symbol of identification with our first Native American Nations cultures,” reads an informational page for the Sherman Indian Museum. “However, many Native Americans have begun to see dreamcatchers as over-commercialized, offensively misappropriated, and misused by non-natives.”

The writer continues, “In the course of becoming so popular outside of the Indian Nation, many varieties of dreamcatchers bear little resemblance to traditional style. They are now made, exhibited, and sold by new-age groups; many traditional Native American people find this an undesirable form of cultural appropriation.”

Is It Appropriation Or Appreciation?

The popularity of dreamcatchers has a sparked an essential debate about appreciation versus appropriation.

According to Oxford Languages, one definition of appreciation is the “sensitive understanding of the aesthetic value of something.” This requires a genuine approach to understanding an unfamiliar culture.

Appropriation, however, is another story. It’s defined as “the action of taking something for one’s use, typically without the owner’s permission.”

When Vanessa Hudgens wore a dreamcatcher in her hair back in 2016, it blew up on social media for all the wrong reasons. Critics accused her of appropriation, making sharp remarks like, “I love her and all, but it’s culture, not a costume.”

“You constantly go out of your way to disrespect cultures to look ~boho. It’s rude as f–k,” said another commenter.

A third added, “Don’t put dreamcatchers in your hair! That you have to constantly be told not to do this and dragged means you are not listening, and it’s frustrating af!!’

Meanwhile, defenders of the pop star essentially asked what the big deal was.

“Some people are too quick to be overly-sensitive,” One fan remarked.

Another chimed in and said, “Too many people love to find reasons to be offended about something these days.”

Skeptics were justified for raising an eyebrow. Since dreamcatchers are sacred charms that protect innocent children, it was likely in awful taste for Hudgens’ to wear one as a fashion statement. Tagging Coachella in her pics, instead of making any mention of the Native American traditions that “inspired” her, was another tone-deaf move.

Hudgens is not the only one who uses Native American culture to her advantage. Tribal imagery has long been used to promote retail products, sports teams, and other commercial enterprises.

How Appropriation Is Commercialized

Take something as seemingly innocent as Halloween. It is entirely ignorant of the terrible history of Native American colonization that cheap feather headdresses or sexy Pocahontas costumes are sold at big-box costume shops. It even supports a revision of Native American history.

“When it comes to Halloween in the Native community, it’s like a big eye roll,” Henu Josephine Tarrant, a member of the Ho-Chunk, Hopi, and Rappahannock tribes, told NPR in 2019.

“It goes deeper than what you’re dressed like,” she said. “When you look at it, and you study these tropes and stereotypes and what they mean and how they affect us as Native people, you know they’re all rooted in a historically violent past…It is a reflection of how we look to [non-Native Americans] and what we are to them.”

How To Avoid Cultural Appropriation Of Dreamcatchers

So you’re still interested in purchasing a dreamcatcher—this information is a great place to start! Before you buy a dreamcatcher, make sure you do your research. It is best to search for Native American artisans and companies. Native Languages of the Americas provides a comprehensive list of websites to buy genuine, handcrafted items.

Mega retailers often sell products that have been mass-produced in overseas factories. Be cautious. It’s also essential to hold these businesses accountable for unethical practices. For instance, in 2012, the Navajo Nation filed a lawsuit against Urban Outfitters, Inc. (whose sister brands include Free People, Anthropologie, BHLDN, Terrain, and Vetri) for violating trademark dilution laws.

The Navajo Nation also took issue with Urban Outfitters’ use of “Navajo” in its item descriptions. They believed this was a violation of the Indian Arts and Crafts Act of 1990, requiring that Indian crafts be marketed without misrepresentation.

Urban Outfitters responded by claiming that “Navajo” was an adjective used to describe a style. Even if this argument is valid, Urban Outfitters hires and compensates Native American artists to create their merchandise. Perhaps buying directly from tribe members is a better option.

A second suggestion is for customers to ensure that dreamcatchers are only used for their intended purpose. Native American artists create dreamcatchers that are intended for use in bedrooms and cribs. They are rarely if ever, marketed as a fabulous interior design addition (or hair accessories)—at least not by respectable producers.

It’s vital to research unfamiliar objects and cultural traditions before adopting them into your own life. There’s nothing wrong with appreciating diversity, as long as you’re not strictly doing it for Instagram likes. To minimize harm to marginalized groups, being honest, mindful, and curious is a great way to do so.