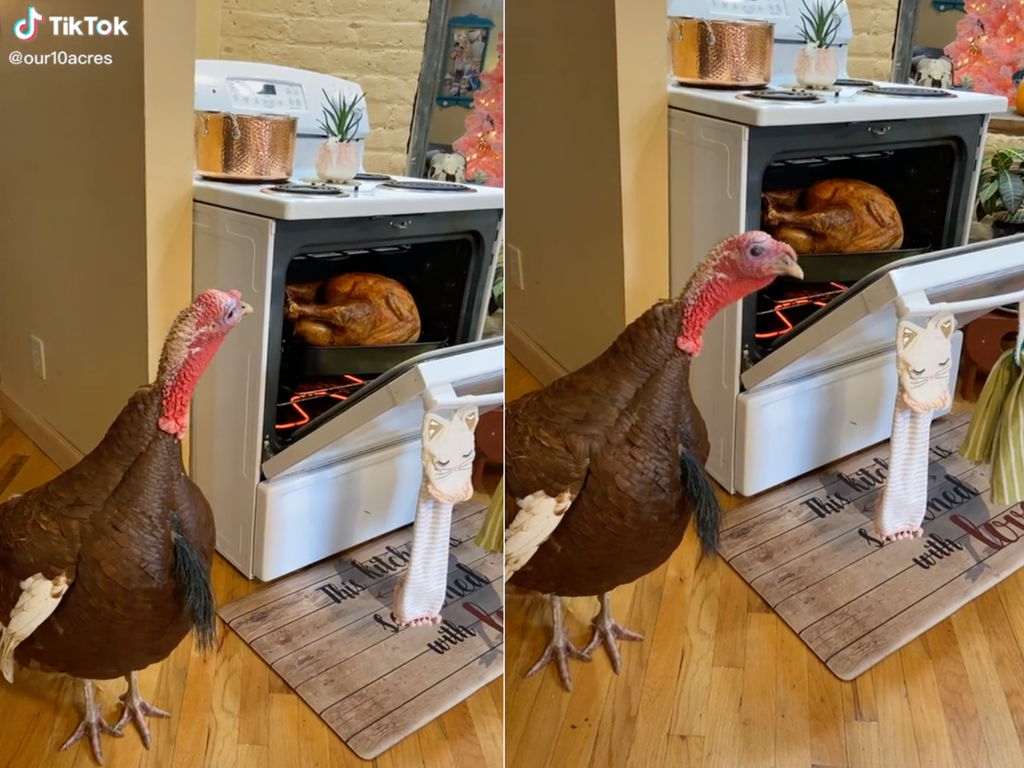 A TikTok featuring a live turkey standing next the oven while its own species was being cooked in it has gone viral and sparked massive debate.

Yesterday was Thanksgiving in America. Many Americans will have prepared a turkey feast.

A TikTok clip by @our10acres went viral. It showed a live turkey in the kitchen next to an oven where a turkey was being prepared.

You can hear the woman filming in the clip saying: “What you doing bub?”As the turkey watches the bird roast, he looks in the oven.

She continued: “It’s okay, you don’t know him.”

The video was viewed 37.2 Million times. Many people also commented in the comments section.

Many found the video amusing, laughing that the turkey might be concerned about its fate next year.

One person wrote: “He’s looking like, that’s it I’m moving out before this time next year.”

Others thought it was all a hoax. “mean”It is believed that animals can feel emotions.

Someone commented: “You do know they are sentient right…it literally knows what’s going on. Feels pain and even emotion. Scientifically proven sentient. Damn.”

Another one: “Come on, don’t do that. It’s still kind of sad and mean to be showing him that. I get you wanna be funny but come on even for an animal it’s mean.”

While opinions were certainly divided, some people called out those who criticised the video, saying that they would most likely be eating meat on that day.

One comment was made by someone claiming it was “kinda sad”@our10acres said that the turkey was purchased from a supermarket and not from their farm.

They suggested that Big Red the turkey was looking at the oven because it wanted it to eat.

They wrote: “It’s ok to feel that way. If it helps, that’s a store bought turkey and Big Red wanted to eat it.

“Turkeys are curious, but have no concept of ovens.”

Previous article
Is the vaccine effective against it? And why is it referred to as the “worst ever”?
Next article
Black Friday protests: Jeff Bezos caricature rides rocket as Extinction Rebellion block 15 Amazon depots