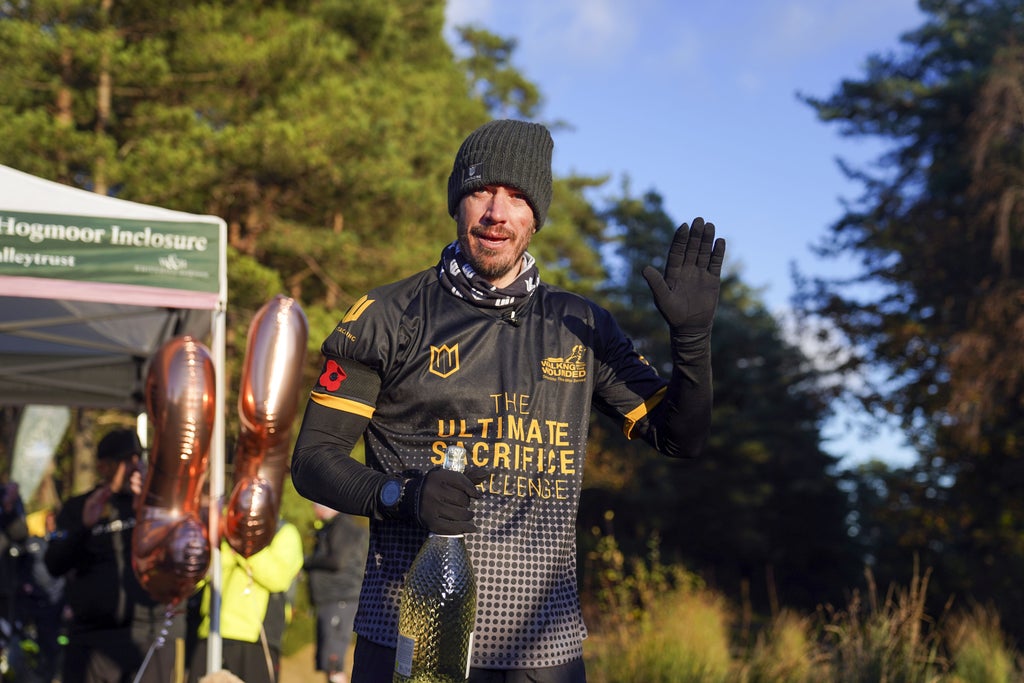 A veteran has completed his challenge to run a mile for every soldier who died in Iraq and Afghanistan by completing 25 marathons in 25 days.

Brian Wood, who holds a Military Cross for gallantry in combat, set out to raise £20,000 for the charity Walking With The Wounded (WWTW) but has already exceeded £70,500 after running a total of 635 miles.

The 41-year-old, from Whitehall Hampshire finished the Ultimate Sacrifice Challenge with a marathon at Hogmoor Inclosure, a former Army off-road vehicle training track near Bordon, Hampshire, accompanied for the final five miles by Fergus Williams, chief executive of Walking With The Wounded.

Mr Wood, a former colour sergeant in the Princess of Wales’s Royal Regiment, said: “I wanted to pay my respects to the 635 people who gave their lives during the Iraq and Afghanistan conflicts. Running 635 miles over 25 days has not been easy but it is no comparison to those who gave the ultimate sacrifice.

“I have been humbled and overwhelmed by the generosity and support I have received from so many of the public over the past month. Thank you to everyone who has donated, run, walked, cycled and cheered me on from the sidelines.”

Mr Williams said: “Everyone at Walking With The Wounded is so impressed and humbled by the incredible challenge that Brian has undertaken on behalf of those who served.

“His achievement is superhuman. The amount that he has raised so far will make a fundamental difference to the lives of our veterans and their families, and it will make a big difference to the number of ex-military that we can support through our mental health and employment programmes.”

Mr Wood was a lance corporal in the 1st Princess of Wales’s Royal Regiment at the Battle of Danny Boy in Iraq in May 2004.

The battle sparked a 13-year legal fight after British troops were given an order to remove the bodies of the 20 Iraqi dead and take them back to a nearby camp along with nine prisoners of war.

The detainees, who were insurgents with the Shia militia Mahdi Army, went on to claim they had been mistreated and heard the torture and murder of their compatriots.

Among the dead was 19-year-old Hamid Al-Sweady, whose uncle Khuder Al-Sweady claimed he had been murdered at the British camp.

The long-running £31 million Al-Sweady Inquiry found in December 2014 that the most serious claims were “entirely false” and the claimants had told “deliberate lies”.

Mr Wood, one of five soldiers awarded the Military Cross for their actions during the Battle of Danny Boy, later described the legal process as an “ordeal”.

To support the challenge, visit www.givepenny.com/the-ultimate-sacrifice.