Tyra Banks Claps Back At Critics Of Her Viral Dress 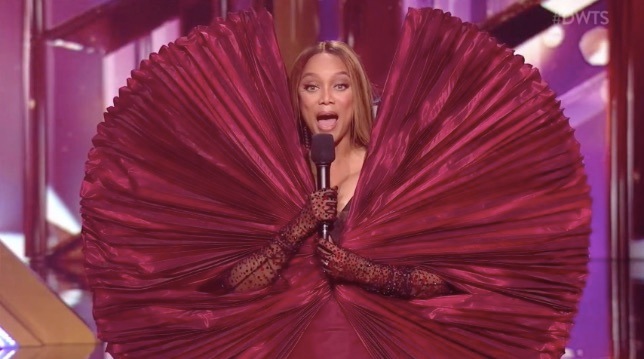 If you have anything negative about Tyra Banks and her fashion choices, she isn’t interested in hearing it.

The Dancing With The Stars hostess’s dress went viral after the September 27 episode. It sparked memes with many fans joking that she looked like a dinosaur.

And of course, the subject came up when Tyra Banks made a recent appearance on The Late Late Show With James Corden. She admitted that she could take a joke, and some of the Jurassic Park memes were pretty funny. But she isn’t letting the rude comments get to her.

“Different is what?” Tyra said in the interview with James Corden. “Better. I don’t have time to be normal in a pretty dress because nobody will say anything about a pretty dress. You’ve got to push it and go for it.”

The viral dress truly is something to see. However, it wasn’t a random dress. Tyra Banks revealed that it has meaning, referencing her days as Victoria’s Secret model.

The internet may not have loved the dress, but it seems like Tyra Banks is a fan. And if she loves what her stylists choose, that’s all that matters. Right?

Even so, many fans remain hopeful the “dinosaur dress” will be the end of the elaborate costumes.

Dancing With The Stars gears up for Britney Night

If you’ve loved Dancing With The Stars Season 30 so far, you’ll want to tune into the October 4 episode. The theme for Monday night is Britney Night, and you can catch your favorite teams compete with Britney Spears’ greatest hits.

Without a doubt, Tyra Banks will probably take this opportunity to pay homage to Britney with her outfits too. What do you think we can expect to see her in? Perhaps the iconic red bodysuit?

No matter what the hostess wears, the October 4 episode will be a lot of fun. The remaining teams are already hard at work in the rehearsal room preparing their routines.

” It speaks for itself. We’re doing a whole night dedicated to Britney. It’s a lot of support, a lot of love. We [support] #FreeBritney,” Gleb Savchenko told Page Six in an exclusive interview.

Gleb and his partner Mel C will perform a tango to “Toxic.”

“It’s like the best song ever, especially for tango. It’s going to be cool,” Gleb continued. “The costumes and the whole concept, the number, it’s dope. We’ll do something, some “toxic” sexy moves.”

Are you excited about Britney Night? Tune in to DWTS Monday night and catch all the action!