Dutch reporter Sjoerd den Daas was stopped by Chinese security while reporting on the Winter Olympics live on air Friday. While reporting for public broadcaster NOS, he stood outside the National Stadium and was interrupted by a guard.

The guard pulled den Daas by the arm as he tried to finish his hit, ultimately telling viewers, “We are now being pulled out of here.”

He then apologetically stated, “We’ll have to come back to you later.” After that, a second guard appeared, seeming to address the camera operator, as well.

“Our correspondent @sjoerddendaas was pulled away from the camera by security guards at 12:00 pm live in the NOS Journaal. Unfortunately, this is increasingly becoming a daily reality for journalists in China. He is fine and was able to finish his story a few minutes later,” said a tweet from the network’s official Twitter account.

Concerns about China’s handling of media are impacting organizations around the world. 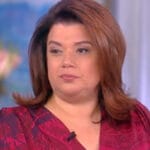 As reported, the growing backlash against China, especially since the country last hosted an Olympics in Summer 2008, put NBC in a dicey position of trying to celebrate the games while not ignoring the shortcomings of the host country. Even lawmakers have gotten involved. Last month, Republican leaders on the House Energy and Commerce Committee sent a letter to NBCU CEO Jeff Shell and Olympics chief Gary Zenkel expressing concerns about how much influence the Chinese Communist Party would have on NBC’s coverage.

At the same time, athletes and journalists who are traveling to the Chinese capital are wary of being spied on by the government, so much so that many are resorting to bringing burner phones and laptops to avoid surveillance.

Execs at NBC, whose parent company Comcast spent $7.75 billion to carry the Olympics through 2032, promised they won’t ignore the very serious issues surrounding China. During a media event last month, Molly Solomon, executive producer and president of NBC Olympics Production, acknowledged “there’s some difficult issues regarding the host nation” but said the competition will “remain the centerpiece of our coverage.”

Previous articleBrooklyn Decker Got ‘Painful’ Mastitis From Bra. Here’s How It Happens
Next articleSwollen Armpits Are Pretty Common on Breastfeeding Parents