Tucker Carlson’s “midget with a microphone” comment on a CNN reporter, garners yet another Controversy! 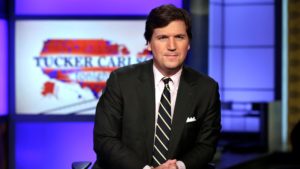 Tucker Carlson used an ableist slur on his Fox News show on Monday night, referring to CNN reporter Shimon Prokupecz as a “midget with a microphone.” Carlson was in the middle of a segment about COVID-19 vaccine mandates, the protests against them, and other outlets’ coverage of the debate. Prokupecz does not suffer from dwarfism, according to a report by The Daily Beast, but advocates for various groups have long called for the word “midget” to stop being used.

Carlson’s offensive language came in the middle of one of his now-infamous segments about the COVID-19 vaccine, which was heavily editorialized as usual. The commentator continues to rail against vaccine mandates, even though Fox News itself has a strict vaccine policy for all employees. This means that Carlson himself must be vaccinated to go to work, though he does not often discuss this fact on his show. Instead, he highlights protesters, particularly those who say they would rather get fired than getting vaccinated.

Monday night’s segment was about a protest in New York City, where Carlson touted the turnout of “thousands of protesters” as a sign that complaints about “this grotesque mandate” are legitimate. He also criticized other outlets for their coverage of the event, saying: “CNN accused them of being conspiracy theorists!”

Carlson then showed a clip of Prokupecz reporting from the scene of the protest for CNN, where he explained what the protesters were telling him. He said that attendees feared the “government is trying to control them by using vaccines,” which Carlson argued without evidence was a mischaracterization.

#midget is @TuckerCarlson verbalizing his hatred of little people!
Tucker actually used MIDGET like he uses the “N” word!
Not surprisingly unique vocabulary troubles for this racist!#FoxNews #Racism #Hate #LittlePeople

“They are crazy because those nurses know less about health care than the politicians and the midget with a microphone on CNN,” Carlson said sarcastically. This is not the first time Carlson has insulted the appearance of a fellow journalist, though it is a notable case because the term “midget” is widely considered a slur. The world’s largest dwarfism support organization, Little People of America, calls it “an antiquated slang term… most often used in a derogatory manner.”

Of course, Carlson’s use of this slur is just a drop in the bucket of his controversial persona. In recent years, many critics say Carlson’s rhetoric has grown more hateful, and the bigotry behind it less veiled. Back in April, the Anti-Defamation League even issued a public call for Carlson to be fired “given his long record of race-baiting.” So far, Fox News has not taken any steps to remove Carlson for these offenses.

Previous articleWillow Smith Considered Brazilian Butt Lift, but Went to Gym Instead
Next article‘Sex And The City’ Star Willie Garson’s Cause Of Death Revealed