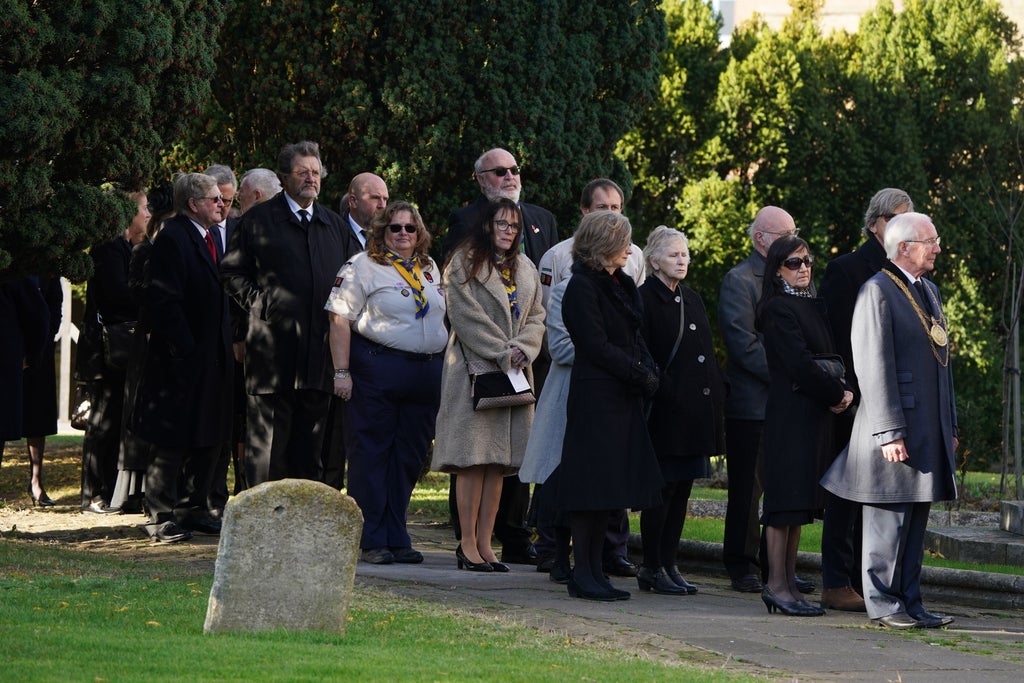 People are once again paying tribute to Sir David Amess as his funeral takes place to commemorate his life.

Sir David was killed in his constituency surgery in Leigh-on-Sea, Essex, on 15 October after a man entered the room and stabbed him several times. A week later, Ali Harbi Ali, 25, was charged with murder as part of an investigation led by Scotland Yard’s counter-terrorism command. He will stand trial next year.

Today, following a 1pm service for Sir David at St Mary’s Church, Prittlewell, which only his family is attending, his casket will be carried in a horse-drawn hearse through Southend’s streets, and colleagues and people close to him are sharing their memories of the MP.

Speaking to press today, former MP Ann Widdecombe said he was “intensely interested in people” and made “a huge difference”.

“It was never just a job to David,” she said.

Earlier today, Boris Johnson also told BBC Essex how he was in the middle of a cabinet away day in Bristol when he learned of the tragedy.

“Everybody was absolutely devastated,” he said.

“I had to go back in to tell cabinet colleagues, many of whom had known David for decades, and I’m afraid several colleagues broke down in tears because it was just an appalling piece of news.

“I think we were also very shaken by the implications of what had happened, and the fact his life had been tragically ended in the way that it was.

“I’ve spoken to members of his family and they’ve had a very tough time, as you can imagine.”

Asked about the MP’s legacy, Johnson said: “I think David’s legacy is multifarious – he did all sorts of things.

“He campaigned on endometriosis, on fuel poverty, on the registration of driving instructors, on children with learning disabilities – he has a tremendous, natural sympathy for people who needed help. He showed what a backbencher can do.

“He has a big legacy of things he actually achieved as a backbencher.”

Sir David served as an MP for 38 years and received a knighthood in 2015 for his political and public service.

The MP was interested in “animal welfare and pro-life” issues and he also called for Southend to be awarded city status during his time in parliament. This has now been granted in honour of his death.

After his death, MPs also called for his dog to be named ‘dog of the year’ in tribute and recently, his dog Vivian indeed won the accolade.

In a statement by his family, which is being read out by Widdecombe at the funeral, Sir David’s family said that their “hearts are shattered” and asked people to “set aside their differences and show kindness and love to all”.

“This is the only way forward. Set aside hatred and work towards togetherness. Whatever one’s race, religious or political beliefs, be tolerant and try to understand. As a family, we are trying to understand why this awful thing has occurred.

“Nobody should die in that way. Nobody. Please let some good come from this tragedy. We are absolutely broken, but we will survive and carry on for the sake of a wonderful and inspiring man.

“We ask at this time that the family’s privacy be respected so that we can grieve in private.

“Our hearts are shattered. However, there was still so much David wanted to do – this we know from the events of the last few days.

“So, this is not the end of Sir David Amess MP. It is the next chapter and, as a family, we ask everyone to support the many charities he worked with.”

This morning, Mark Francois, MP for Rayleigh and Wickford and close friend of Sir David, said when he arrived at the church: “I think today is an opportunity for the people of Southend to come together as a community to express their grief and sorrow for the loss of Sir David.

“The family have been greatly consoled from the outpouring of sympathy. He was my best friend in parliament.

“We were very close and if I’m honest, today is very emotional for me but I hope when I do my eulogy I will do justice.

“He was my friend but also a loving husband, father and fine parliamentarian. One of the privileges of knowing him was you never knew what he was going to do next.”

As well as the private funeral today, there will also be a funeral mass on Tuesday at the Roman Catholic Westminster Cathedral in London.

Previous articleExpert warns that this week’s “super cold” snap could have dire consequences for your health.
Next articleSpotify to Do What Adele Did for Her New Album