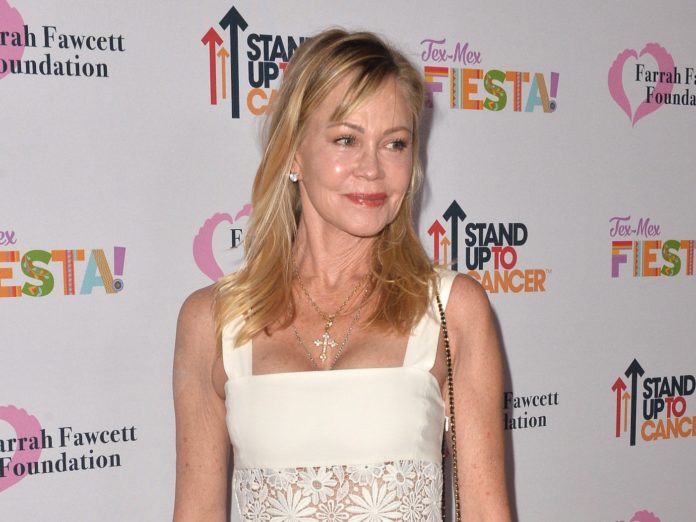 Is Melanie Griffith done trying to find ‘The One’? According to one tabloid, Griffith has come to the conclusion that she’s just not the marrying type. Here’s the latest gossip about Griffith’s love life.

This week’s edition of the Globe reports Melanie Griffith has been unlucky in her love life. The Working Girl star has now been married and divorced four times, and sources say she’s finally done trying. A source points out that the actress “blamed her exes for her failing marriages” for years until recently. Apparently, Griffith had an epiphany while visiting her mother Tippi Hedren at her wildlife rescue retreat.

“Melanie watched a tiger pace back and forth in a cage,” the insider begins. “She recalled that as a teen, living in Africa, she saw wild animals running free and she wanted to feel that way, not like an animal confined to a cage. She longed to call her own shots and be responsible for her own happiness or happiness.”

Apparently, she’s decided that she’s done “trying to please her partners,” a source explains. “If she wants to leave dishes in the sink, travel, take long walks or watch TV all day, she’s free to do it. She’s stopped playing the blame game and is now able to be good friends with all her former hubbies.”

Will Melanie Griffith Ever Get Married Again?

This is an incredibly pointless story considering Griffith has already said that she doesn’t see herself ever getting married again. “I really don’t think it’s relevant for anyone anymore,” Griffith told InStyle back in 2018. “But especially if you’re 60 and you have four kids and you’re living the life you’ve always wanted. Then why get married?”

And despite the tabloid’s claim that Griffith “blamed her exes” for her divorces, she insisted in that very same interview that she didn’t hold any ill-will towards them. “All of my husbands, my three husbands—I love them all so much, and we’re all very close,” Griffith said.

So, it seems like Griffith already came to these conclusions years ago, so we’re failing to see a point for this story. It’s obvious that Griffith is happy and not searching for a man, and she’s on good terms with her ex-husbands. What more does this tabloid want from her?

The Tabloid On Melanie Griffith

This is a bold story considering the last time we read Melanie Griffith’s name in a copy of the Globe. Late last year, the very same magazine claimed Griffith’s health was in danger. According to the report, Griffith looked out of sorts and her skin was “blotchy.” The outlet jumped to the conclusion that Griffith was secretly hiding a heart attack. But, in reality, the publication was just insulting Griffith for how she looked. Clearly, the Globe has no business gossiping about Melanie Griffith.