The UK lockdown summed up in two images 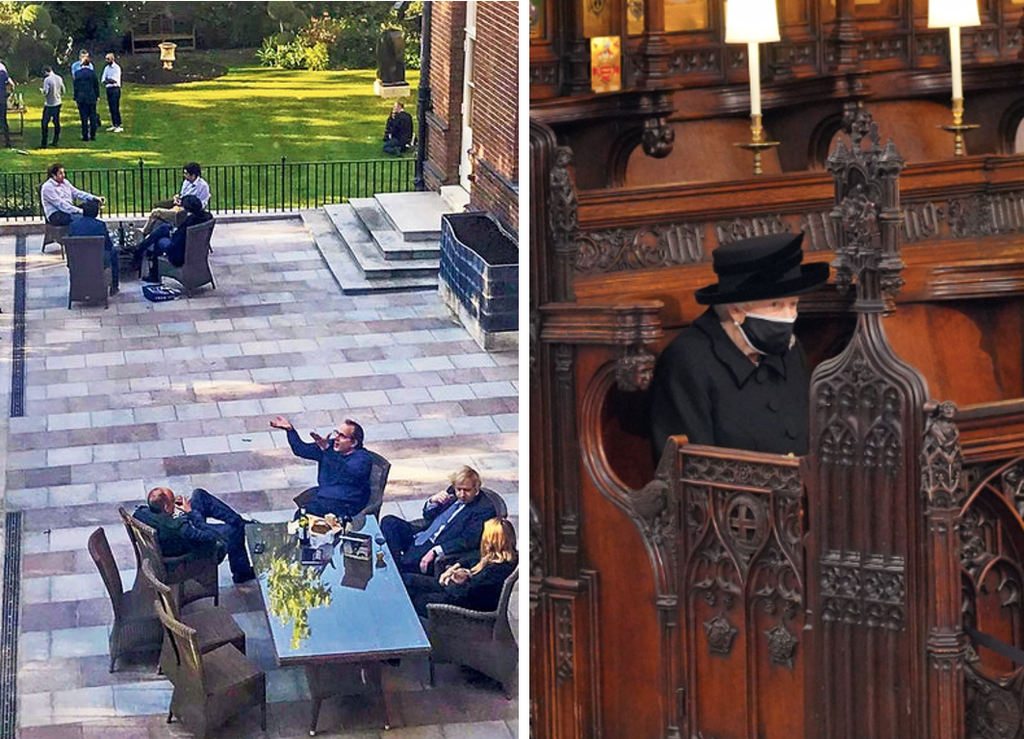 As the Queen prepared to bury her husband of 73 years in April 2021, two different parties were held at Number 10 on the eve of his funeral as the rest of the country was in lockdown.

Images of the Queen sitting alone at the funeral of the Duke of Edinburgh were beamed around the world. But it’s now been revealed in a Telegraph exclusive that government officials were partying the night before, showing a stark difference in the following of lockdown rules.

Political Correspondent for the Telegraph Tony Diver exclusively revealed that two parties were held at Number 10 on 16 April 2021 – the eve of Prince Philip’s funeral.

In a Twitter thread, Diver revealed allegations of a leaving party held for a Number 10 photographer.

Diver claimed: “Staff partied in the basement of No10, to music DJd by a special adviser. One broke Wilf Johnson’s swing in the No10 garden. Another was sent to the Co-op with a suitcase to buy booze.”

A second leaving party is believed to have been held on the same night for James Slack, Boris Johnson’s Director of Communications.

There, Diver alleges: “Staff gathered for a speech from Slack, with others dialling in via Zoom. Booze drunk and attendees spilling into the garden. Chatting and drinking into the early hours.”

At the time the parties are alleged to have taken place, indoor gatherings in Britain were banned. Outdoors, the rule of six applied.

Just thirty people were permitted to attend the Duke of Edinburgh’s funeral and the Queen sat alone during the service.

The allegations of two more lockdown breaking parties being held in Number 10 come as Johnson is facing criticism for attending yet another one held in the gardens of the government building.

In May 2020, Johnson and his staff were pictured in the gardens drinking and eating wine and cheese.

At the time, outdoor gatherings of more than two people were banned, a two-meter distance was supposed to be adhered to and schools remained closed

Johnson has faced calls to resign for attending the party as it emerged an email was sent telling people to bring their own alcohol.

Johnson maintains he believed it to be a work event but admitted to attending the gathering.

No 10 has since apologised to Buckingham Palace for two parties held “at time of national mourning” following the Duke of Edinburgh’s death.

A spokesperson for the prime minister said Downing Street had said sorry to the Palace following the reports.

The spokesman said: “It is deeply regrettable that this took place at a time of national mourning and No 10 has apologised to the Palace.

“You heard from the PM this week, he’s recognised No 10 should be held to the highest standards and take responsibility for things we did not get right.”

Asked why No 10 had apologised rather than Boris Johnson himself, the spokesman said: “Well, again, the Prime Minister said earlier misjudgments have been made and it’s right people apologise, as the PM did earlier this week.

“It remains the case that I can’t prejudge the inquiry, which you know is ongoing, which has been led by Sue Gray, but we acknowledge the significant public anger, it was regrettable this took place a time of national mourning.”