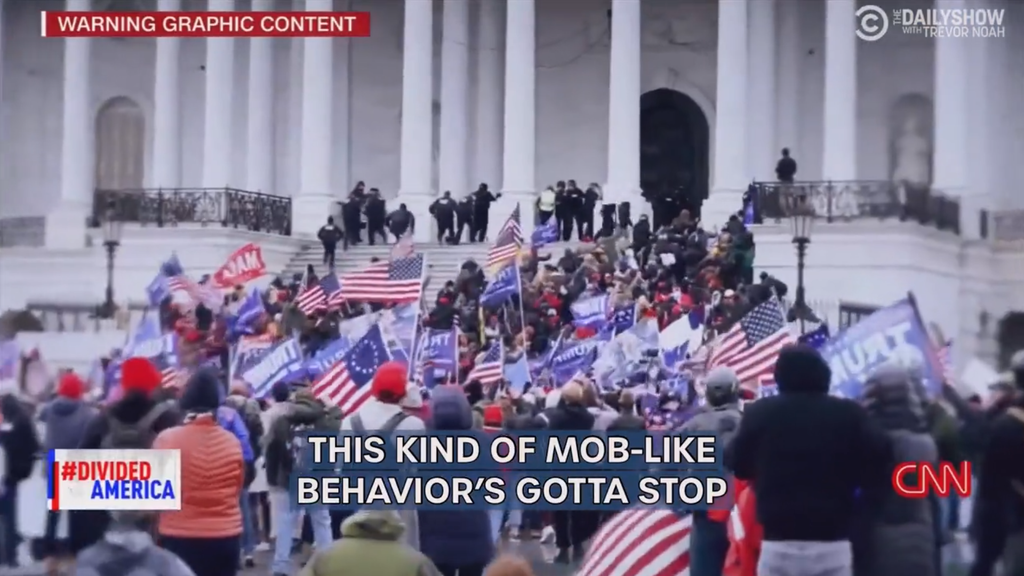 The Daily Show delightfully trolled Fox News ahead of the anniversary of the January 6 riots.

Exactly one year ago today, Trump supporters swarmed the Capitol in a bid to overthrow Joe Biden’s presidential win.

On Wednesday the show tweeted a video where they took footage of remarks made on Fox News about Black Lives Matter protesters and cut it with footage of the U.S. Capitol riot.

The video, overlaid with a comedic backing track, sees some of the network’s most well known talking heads condemn “mob-like behaviour” and remark that they’re “destroying our country”.

Following the riots, there were accusations that Fox’s reportage of the riot was lopsided in comparison to its commentary on the Black Lives Matter protests.

A Forbes article last January outlined Fox News host Tucker Carlson’s contrasting takes when speaking about both groups. The network’s coverage of the riots has also been criticised in a Daily Beast analysis piece published today under the headline “Fox News During the Jan. 6 Riots Was Even Worse Than You Remember”.

Twitter enjoyed The Daily Show’s clip, with one remarking it’s “the greatest thing on the internet”:

The Daily Show didn’t stop there, however.

Another comedic clip shows where some of the rioters are now as upbeat music plays and colourful graphics frame the screen.

Ted Cruz also features, with the show hilariously writing that a year on, he’s “somehow not yet expelled from or laughed out of office”.

Their verdict on Trump? “Yet to be held accountable for anything. Planning his next coup attempt”.

Previous articleHear Shaq collaborate with Steve Aoki for ‘Welcome to the Playhouse.’
Next articleHow to Watch the Harry Potter Reunion: Where It’s Streaming