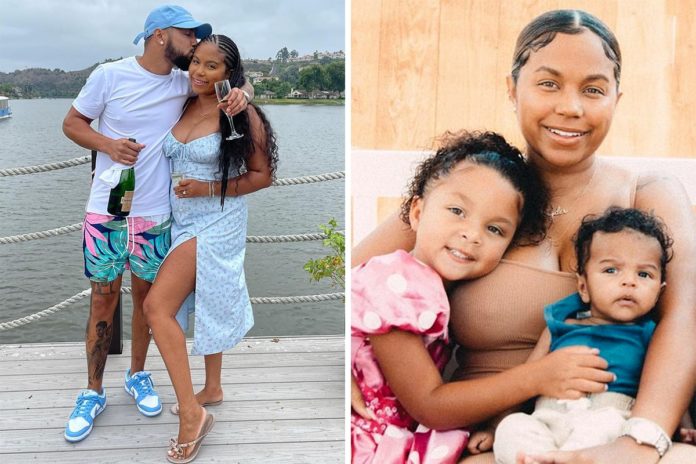 TEEN Mom Cheyenne Floyd showed off her post-baby body in a new photo with her fiancé Zach Davis as the couple’s wedding date draws near.

The Teen Mom OG star showed off her light blue dress, which had a long cut near the thighs.

Meanwhile, Zach had a blue cap on his head, wore a white shirt, and put on a pair of colorful shorts.

The engaged couple appeared to be in good spirits as they drank champagne while standing on a platform near the waters.

In the snapshot, Zach planted a kiss on the forehead of the MTV star.

Cheyenne captioned the photo: “Still can’t believe I get to marry my best friend.”

The reality stars got engaged in April and welcomed their first child together, Ace, back in May.

She also has a 4-year-old daughter, Ryder, who she shares with ex Cory Wharton.

Back in July, Cheyenne confessed to her fans that she and Zach had started planning for their upcoming nuptials.

🍼  Follow all our latest news & stories on Teen Mom.

In the short video, the TV personality was cradling her sleeping baby boy as she sported a sweatshirt with the words “Future Davis” engraved on it.

The TV star continued: “We’ve been waiting until Ace was born to really tackle wedding planning, but we’ve had a venue and a date locked in now, before Ace was born actually.

“I’m so excited to start sharing and to start taking you guys along this journey.”

She concluded: “But just know, it’s about to be a long journey because we’re not getting married until next year.”

In early September, Ryder had launched her own live video on Instagram, without her mother knowing about it.

Cheyenne filmed the tiny tot while she apologized over the clip: “Please excuse my child who apparently knows how to go on live without the help or assistance of her mother!”

One sneaky fan had screen-recorded Ryder’s live session and re-shared the video onto Reddit.

The little girl was holding the camera in selfie-mode while wearing a butterfly wing filter.

Cheyenne’s family could be heard in the background as they had various conversations going on when her Aunt noticed that the toddler had tons of comments coming in from followers.

“Ryder are you live?” was heard aloud as someone broke into laughter before the clip was shut down.