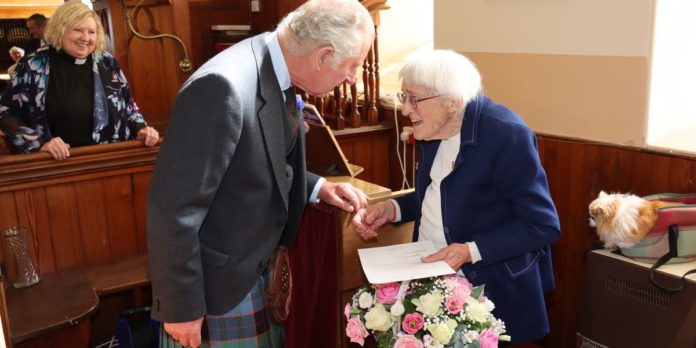 A surprise presentation by Prince Charles was made to a 75-year-old church organist, who was honoured for her dedication.

Charles, known as the Duke of Rothsay in Scotland, was staying at the Castle of Mey near John O’Groats, which belonged to the late Queen Mother, and like her attends Canisbay Parish Church when he is staying there.

Miss Edmondson, who began playing the organ in her 14th birthday, has continued to play the organ in numerous churches throughout the country for the past seven decades.

Charles congratulated her and sent her a note from the Moderator of the General Assembly of the Church of Scotland. The Rt Rev Dr Iain Greenshields described her as “a wonderful person.” “truly inspirational”.

Miss Edmondson was joined in the church service by Poppy, her dog that travels around with her in a tartan basket.

Charles was 89 when he spoke after the service. “quite taken”Poppy.

She stated: “I go everywhere with her and I told her that she was going to meet the Prince and she licked his shoes, so that was nice.”

After the service, Prince Neil Buchan/PA planted a tree.

She stated: “Mary has been playing the organ in various churches and denominations for 75 years and started playing at Canisbay Church when she was 81.

“She is an amazing lady and much loved, so we wanted to organise a special surprise for her during the annual Royal Service.

“I told her at the last minute what was going to happen and the look of surprise on her face was wonderful because she did not have a clue.

“When His Royal Highness approached her with the basket of flowers and Moderator’s letter with a huge smile on his face she was in absolute shock.

“It was so lovely and very, very special.

“He is a very warm and gracious man and Mary held his hand and told him that she started playing the organ when she was 14.

“Prince Charles told her that she must be the most longstanding organist, having played for 75 years and still going.

“The presentation meant so much to Mary and I told her that we appreciated her and we loved her.”

After the service, Charles planted a rowan tree in the church garden to mark the Queen’s Platinum Jubilee and a plaque will be put up at a later date.