Lex Pina and Esther Martnez Lobato created Sky Rojo, a Spanish action crime drama series. The tale follows three prostitutes, Coral, Wendy, and Gina, as they flee Las Novias Club while being pursued by Romeo, their pimp, and his goons, Moisés and Christian.

Three prostitutes abandon their pimp, who is seriously injured, and flee in a desperate attempt to survive. Three men on one side scream for vengeance. Three ladies, on the other hand, want to be free.

Romeo, their pimp from Las Novias Club, and his minions, Moisés and Christian, pursue Coral, Wendy, and Gina on the run in pursuit of freedom. Together, the women embark on a frantic, chaotic journey in which they must face numerous dangers and live each second as if it were their last, all while strengthening their friendship and learning the most important lesson: that they are stronger and have more options to reclaim their lives when they work together.

“On the run from their pimp and his henchmen, three women embark on a wild and crazy journey in search of freedom. From the creators of “Money Heist.”—Official Netflix synopsis 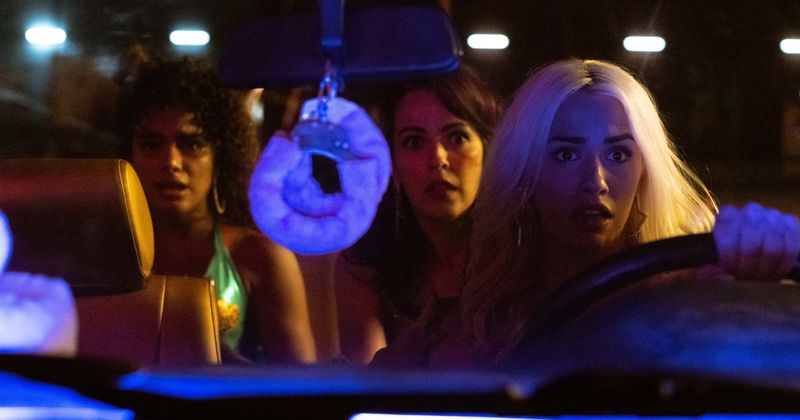 Sky Rojo Season 2  aired on Netflix at 12:01 a.m. PT/3:01 a.m. ET on July 23, 2021. Season 2 contains the same amount of episodes as Season 1, a total of eight. It is, without a doubt, exciting news for spectators. Netflix also announced the release date for Season 2 of Sky Rojo on YouTube three months ago.

Season 3 has yet to be officially announced; however, Season 2 indicates that a conflict is on the way. Season 3 will almost certainly launch solely on Netflix if the streaming giant gives it the green light. By signing up for the platform’s free trial, you can watch the past two seasons.

And The Plot Thickens (spoilers ahead)

The conclusion of Season 2 leads us to believe that Moises and Romeo will join forces to find the girls. They have taken Romeo’s money, and Moises is seeking retribution for his brother’s death. Romeo had the option to save him, but he chose not to. It’ll be interesting to see how Moises reacts when he learns that Romeo has also murdered his mother.