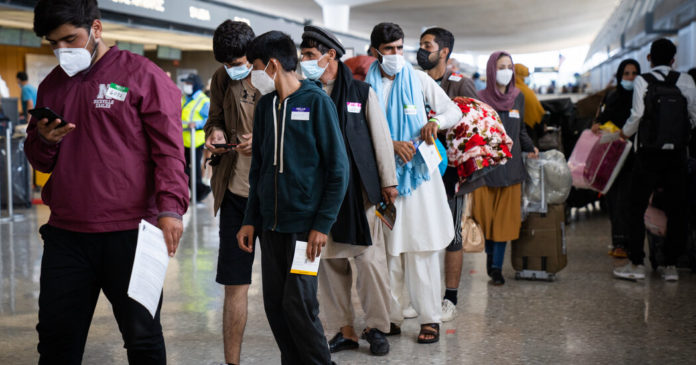 Senate Republicans are pressing to use a spending bill needed to keep the government open past midnight to curtail assistance to Afghans who were quickly evacuated to the United States as American troops withdrew last month.

The proposal by Senator Tom Cotton of Arkansas is just one of a series of skirmishes over a bill that would extend federal funding into early December and provide emergency funding for the resettlement of Afghan refugees and disaster recovery. The legislation is expected to pass later Thursday with bipartisan support, but first, Republicans have demanded votes on several proposed changes.

Democrats were bracing for a close vote on Mr. Cotton’s measure, with the possibility of calling in Vice President Kamala D. Harris, who serves as president of the Senate, to break a 50-50 tie and defeat it.

Mr. Cotton’s amendment would cut off aid for things such as housing, food and medical benefits after March 31, 2023 for Afghans who were granted parole to quickly enter the United States because of the urgent humanitarian crisis.

Mr. Cotton has argued that terminating the benefits is reasonable, considering that Afghans who received special visas for helping the American military may only receive such benefits for eight months.

The amendment would also strike from the bill language that would waive certain requirements for obtaining driver’s licenses or identification cards, making it easier for the Afghan refugees to get them. Those who were granted parole lack some of the documentation required under the REAL ID Act, which was created after the Sept. 11 terrorists attacks to enhance security on commercial airlines.

His amendment also requires the Department of Homeland Security to work more quickly to process Afghan asylum applications, moving up the deadline to conduct a first interview with an applicant to 15 days instead of 45 days, and requiring the department to make a decision within 150 days of the application’s filing.

Senator Rob Portman, Republican of Ohio, said the amendment would ensure Afghan evacuees are “properly vetted.” But Senator Jeanne Shaheen, Democrat of New Hampshire, argued the amendment was unnecessary, saying the evacuees were already being properly vetted and it merely blocked badly needed benefits for those in dire need of help.

Senator Patrick Leahy, Democrat of Vermont and the chairman of the Appropriations Committee, touted the bill’s provisions to help Afghan evacuees in a speech on the Senate floor before the vote. He urged his colleagues to “strongly oppose” Mr. Cotton’s proposal and other amendments offered by the Republicans, warning that accepting any could slow down the process and result in a government shutdown.

“It provides critical assistance to Afghan refugees who fled the Taliban in the wake of the U.S. withdrawal from Afghanistan,” he said of the funding bill. “Many of those refugees worked with American forces and helped us.”