A 12-year-old girl was told to go home because her outfit violated the school’s dress code. After her furious mother shared the video of her argument with the school principal, she was furious.

The rules and policies of educational institutions are very strict and can cause problems for students and parents. This 12-year-old girl’s mother experienced the same thing when her daughter was sent home to buy clothes.

The video was shared online by @khalesei_holt, the TikToker. It has been viewed more than 9.4 million times. The video features a conversation between the Ford Middle School principal in Tacoma and the mother of her three daughters.

According to the caption of the video, the TikToker’s young daughter was told to leave school because of her dress. The caption read:  “And the principle bringing up attorneys!!!!!!!! What a JOKE!!!!!!!!!!! (sic)” The viral video started with the mother saying:

She then started recording her conversation with the principal, who told her she was not allowed to record anything and even mentioned attorneys. The mother replied that she was recording everything for her protection.

The TikToker’s daughter can be seen briefly in the video, wearing what looked like a T-shirt and yoga pants. However, it cannot be said with certainty whether the outfit she had donned in the video led to her dress code violation. The mother further responded with:

“But she’s still going to go to class.”

In response to her query, the principal replied with “not right now.” Finally, the mother retorted, “So you are taking her education away because of her dress code?” Soon afterward, the principal stormed out of the room without speaking a word. 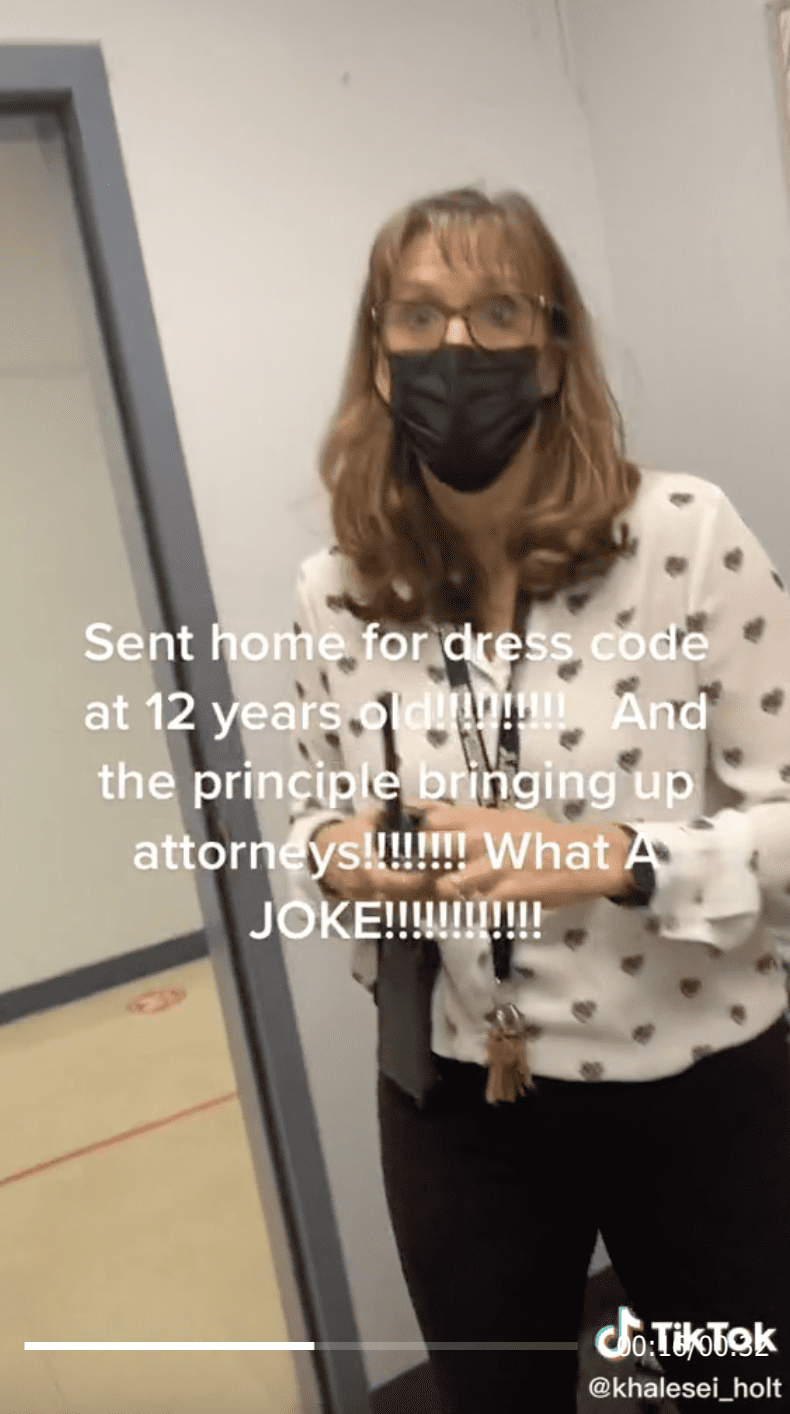 The TikToker’s immediate reaction was that her daughter would attend her lessons despite the principal’s verdict. Many people shared their thoughts on the viral video. One user shared a sarcastic comment: “Great parenting. Teaching her that rules don’t apply.”

Another one commented: “If a teacher is distracted by a student’s body or clothing, they aren’t cut out to be a teacher, period.” There was yet another user who asked a valid question: “Is the dress code not sent out to parents at the beginning of the school year?”

The video was followed by another video, where an official told the mom to take her daughter home for the day, even if she changed her outfit.

In another incident, a teenage boy was sent home because he donned a pair of shorts to school on one of the hottest summer days. Shane Richardson returned home wearing the skirt of his sister, as per the school dress code.

Shane said that no air conditioning was turned on at Moffat Academy, Dumfries, and Galloway in Scotland after the coronavirus pandemic. Hayley, Shane’s mother, was not happy with the school’s dress code policy.

The school then issued a statement, which said that feedback from students, parents, and guardians had led them to review the current policies.

There was another dress code violation scenario that unfolded in British Columbia with a teen girl, Karis Wilson. Karis’s dad was infuriated after his daughter was told that her clothing reminded her female teacher of a “lingerie outfit” and it could make a male teacher or student feel utterly awkward.

The girl wore a knee-length black dress with lace trim over a white turtleneck with long sleeves. Mr. Wilson described the school’s policy as being ridiculous and said that his daughter’s dress was “very modest” and the staff was exaggerating things.

He shared his disappointment with the system and said that he could not believe that such a thing could happen in 2021. He appealed to the public to support Karis and him so future incidents like this could be avoided.