School Authorities Banned 34-Year-Old Mom From Visiting Her Son Due To Her Revealing Outfit!!

By Alex Johnson
September 13, 2021
In
ViralTikTok

Isabel, the mother of three, burst out in rage when her son’s school authorities barred her from entering the school premises because of her low neckline top. 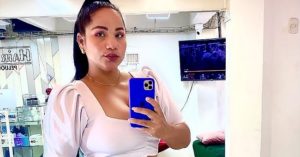 A school is a place of guidelines and discipline. It implements a dress code for the students. However, shocking an institute in Soledad, Colombia, implemented the rules on the parents, too.

Isabel Castro shared a story that had turned her furious when the school staff stopped her from entering a parent-teacher meeting at her son’s school, as she was wearing a so-called, “inappropriate” outfit.

In some photos she shared, the 34-year-old mom was wearing a white low neckline top and blue ripped jeans. Castro went to her son’s school with her husband, Cristian Caviedes, however, the school staff prohibited her from entering the place. They said she could not enter in such an “inappropriate” outfit. Castro told El Tiempo, “I left my house and looking and myself in the mirror as I thought I was well-dressed. I was simply wearing jeans and a blouse, which was pretty low cut but was not vulgar.”

She revealed that the school authorities simply overreacted and made her feel awkward. They highlighted that her outfit was not proper, as she was already a mother of three children.

To this statement from the school staff, Castro said, “I feel discriminated against as nobody has the right to point out or criticize another individual.” She further added that she is pretty confident about her body and she tries to dress accordingly. She opts for the dress that makes her feel best. She believes the number of children does not dominate her style statement.

Her spouse has always been supportive. He said, “Think about all the women out there, suffering all these types of harassment at the moment.”

After a long debate, Castro and her husband were ultimately allowed to step inside the meeting. The netizens took the debate to another level, delivering unlimited comments on the posts. They expressed their opinions and pointed out different aspects of the matter.

Previous articleWoman Reveals Her Clever Trick That Saved Her From A Man Trying To Get Her Into His Car
Next articleGirl Demands Compensation Of $3.5 Million Due To A Mistake In The Hospital Maternity Ward!!