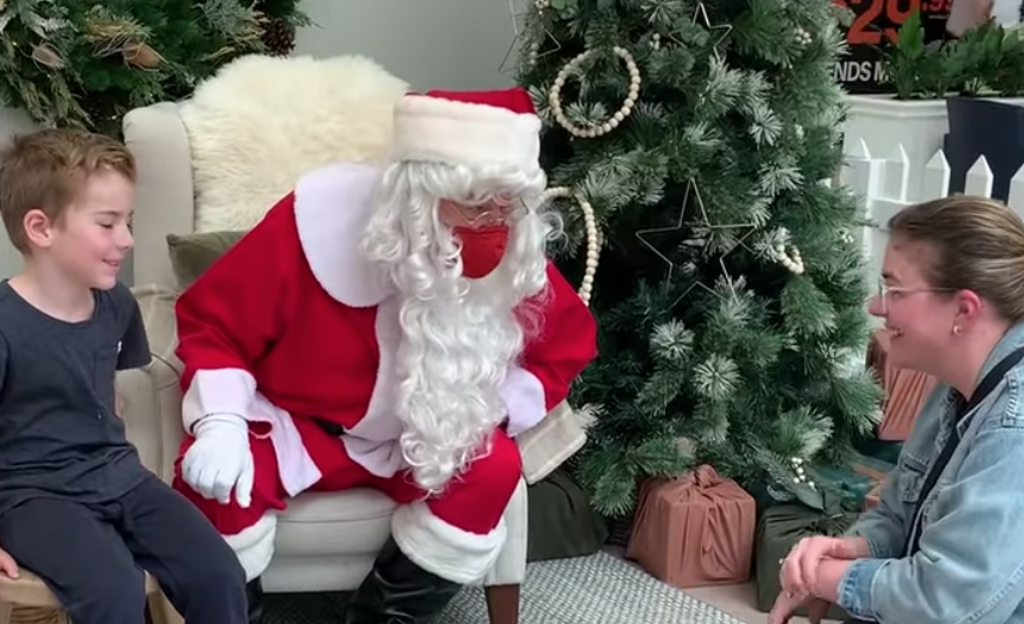 Santa may have done more than just make a naughty list.

What should have been a jolly visit to a New Zealand mall Santa Claus quickly became horrifying when he asked a child’s mom whether there was anything she could do to “fix”His deafness.

Since then, the mom shared a clip from the interaction on Facebook.

“Today we went to see Santa!!”She began her job.

The video shows Carter, a 5-year-old boy, and his mom talking sign language together as they meet Santa Claus.

Carter smiles and plops down on a stool next to Santa. He then looks at his mom, who asks him via sign language what he would like for Christmas.

The boy tells his mother, who is confused, that he wants a golden Iron Man figurine. “Eh?” — seemingly asking the mom to translate what the young boy is wishing for.

According to the captions in the video, Saint Nick turns towards the mom and questions her. “Is there nothing you can do to help him with surgery?”

The mom, who is still stunned, tries her best not to be upset but is clearly upset by the comment. She said, “No, there’s no need for that,”Carter looks at his mom.

The Santa returns again. “Nothing you can do to fix it?”The mom asserts this once more. “There is nothing to fix — we have sign language.”

Even though the interaction was brief, it was extremely rude and insensitive. This video has been viewed over 20,000 times online.

“This is not the first time I’ve had to have this conversation with Santa🤦🏻‍♀️🎅🏼 It’s awful having to answer these questions in front of Carter – when we are there to talk about his Christmas Wishlist! 👎 I kept up my smile but wanted to get of there as quick as possible!”The mom was devastated and captioned her Facebook post.

Many commented on the mother’s patience and refusal to act out.

“I though okay bit awkward and then he said “that”… my jaw dropped and I was speechless. You handled it with great grace and tact!!” one comment read.

Another Facebook user wrote: “Most folks don’t have positive Deaf influences in their lives, and the only information they get about the Deaf Community is through videos like that. So, we shouldn’t be surprised when an elderly man dressed like Santa immediately goes to, “Can we fix him?” :*(”