Realtor Films As His Clients Starts Quarrelling In Middle The House Tour!!

Recently, a real estate realtor shared a TikTok video, leaving the netizens stunned when a couple started yelling at each other in the middle of a house tour. The clip features the heated-up situation between the couple. The pair were screaming vulgarities without even minding the realtor’s presence. 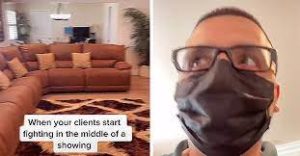 The real estate realtor was shocked at the sight, as it was a comparatively new experience for him. It’s not a part of his daily job and it’s pretty complicated to handle these types of clients.

The clip highlights Alejandro Medina, the real estate relator wearing a mask, uncomfortably starring around, waiting for the couple to stop their fight during a property-showing appointment. 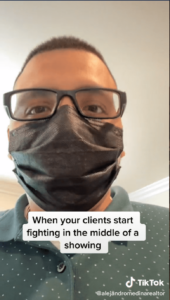 As the clip proceeds, we can clearly hear a woman’s voice screaming, “You don’t understand me” in a pretty distressed tone. However, the counter reply comes in the same tone from the man saying, “Fuck you, I have not fucking touched you.”

The realtor shared the video with a caption quoting, “When your clients start fighting in the middle of the showing.” The caption shows the disappointment and frustration of the man. The video has gone viral and collected over 16,000 likes and lakhs of views.

The netizens have badly roasted the pair, passing some really hilarious jokes about the situation. One user wrote, “Why are they shopping for a house when they should be hopping around for a new marriage?” While another user passed a joke saying, “Now you can sell two houses when they finally break up! Congrats!!”

While many of the netizens were unhappy with their behavior, some suggested them to immediately visit a couple’s therapist and not a realtor. One netizen commented, “Maybe less house purchasing… more couple’s therapy. Just perhaps.”

Most of the users labeled their relationship as a toxic one and highlighted that their abusive tone clearly points out their negative energy. One user described the experience with such relationships, saying, “Idk, how people can yell like this at each other and stay together… sounds pretty miserable.”

With netziens showing their comments, some wanted to know the root cause of the fight. However, some pointed out that the video was surely engineered and the voice note was instilled in it from an old fight.