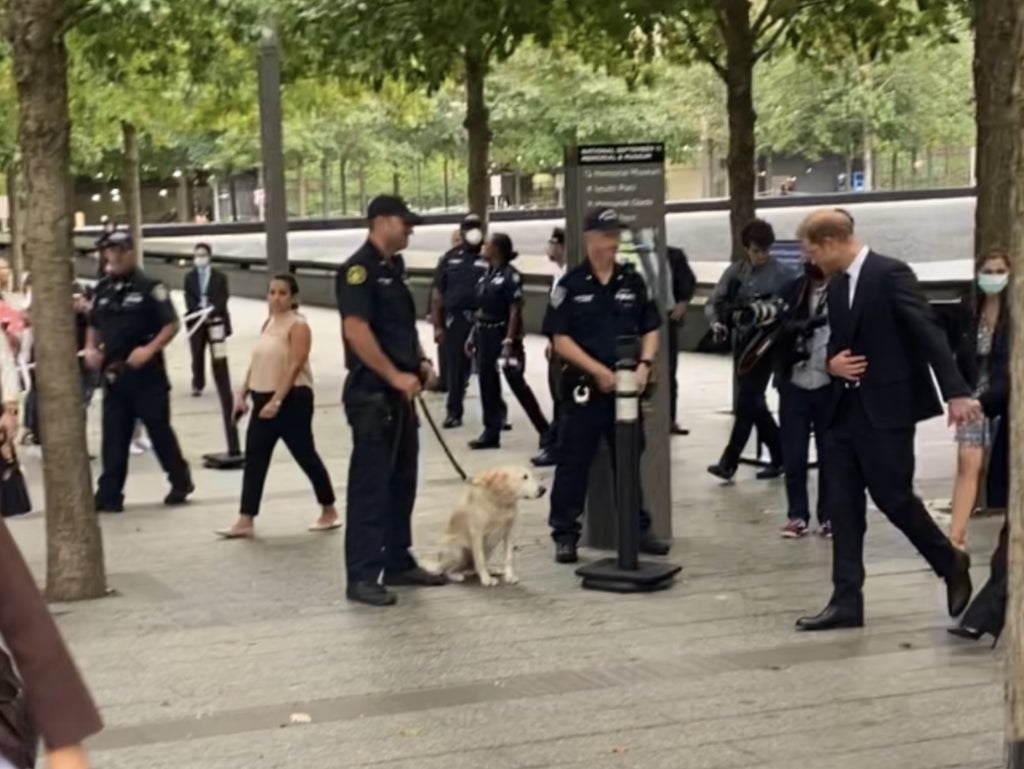 The Duke and Duchess of Sussex were spotted leaving the World Trade Center on Thursday after they visited One World Observatory with Mayor Bill de Blasio and Governor Kathy Hochul.

Dressed in a black high-necked coat and black trousers, Meghan was asked if the pair were enjoying their trip to New York, to which she replied: “It’s wonderful to be back, thank you.”

A clip of Prince Harry and Meghan Markle leaving their second stop, at the 9/11 museum, has since circulated on Twitter – and there’s one small interaction that users are going wild for… it appears as though Prince Harry greets a security dog as he heads towards the car.

He looks down, appears to say something while facing the dog, as the pooch’s police handler smiles.

This wasn’t the first time Harry has publicly shown his appreciation of animals. The Duke was so excited about Archie’s birth that he thanked reporters before turning to the stables and adding:

He thanked the reporters before purposefully turning to the stables and adding: “Thanks, guys!”

Naturally, the speech sent social media into hysterics after one Twitter user joked: “Prince Harry thanking the horses behind him at the end of the video tells you everything you need to know about how much sleep he got last night.”

According to Parade, the pair have two dogs of their own: Pula, a black labrador, and Guy, a beagle, so it’s no surprise that Harry’s seemingly a dog person.

The visit marks their first public appearance together since the birth of their daughter Lilibet in June.

The pair announced earlier this week that they were heading to Saturday’s Global Citizen Live in Central Park “to continue their urgent work with world leaders in the pursuit of global vaccine equity to end the COVID-19 pandemic for everyone, everywhere”, according to Global Citizen.

Previous articleFootball punter wins £110,000 thanks to outrageous Ziyech and Dendoncker bet
Next articleBillie Eilish Calls Out Double Standards in Hollywood