Will Harris squatted on the ground near midfield, his head between his legs, as a few dozen Baltimore Ravens celebrated wildly 30 yards away. 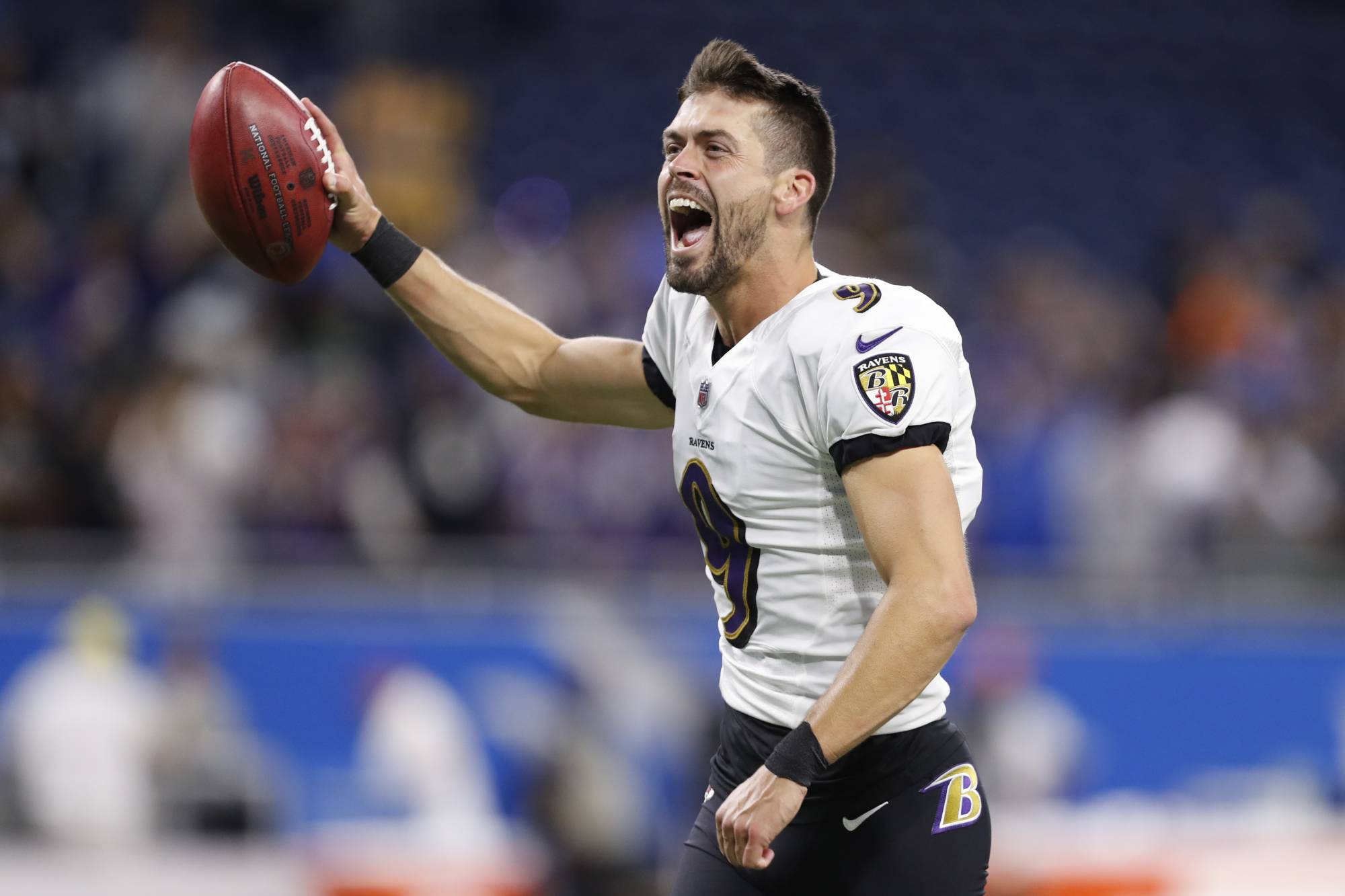 In the middle of their scrum: Kicker Justin Tucker, who handed the Detroit Lions their third straight loss of the Dan Campbell era, this one in unfathomable fashion.

Tucker made an NFL record 66-yard field goal as time expired, bouncing his kick off the crossbar and into the netting behind the goal post to give the Ravens a wild 19-17 win over the Lions at Ford Field.

“I don’t even know how to describe it,” Lions coach Dan Campbell said. “I didn’t think it would make it. I know he can reach it if you kick it low, but you just – if you said that they’re going to kick a 66-yarder to win the game, you’d take those odds. But he made it. Kudos to him. They put themselves in a position to do it, too. That’s why you talk about it, it’s just, for them it’s how do we get one more opportunity to at least take a swing at this because that’s why. That’s what happens.”

The Lions scored all 17 of their points in the second half and were in a position to give Campbell his first win as Lions coach when Ryan Santoso made a 35-yard field goal with 1:04 to play.

But the Ravens, held in check all day by a disciplined Lions defense, made two magical plays in the waning seconds and perhaps got some help from officials to finish the comeback.

The Lions sacked Lamar Jackson on first down, forced an incomplete pass on second down, and sacked Jackson again on third down, setting up a fourth-and-19 with 26 seconds on the clock.

Playing against a three-man rush and with a four defender spying him, Jackson completed a 36-yard pass to Sammy Watkins to get the Ravens to the edge of field goal range, then spiked the ball with 7 seconds on the clock.

Jackson threw one final incompletion on second down when the Ravens did not appear to snap the ball until the play clock expired.

Referee Scott Novak said in a pool report he had not reviewed the play to know if there was an error with the clock, but that back judge Terrence Miles administered the play correctly.

Said Campbell, “There’s nothing I can say to that because it’s the same thing. Tomorrow you’ll get an apology and it doesn’t mean anything. That’s life and that’s the hand we were dealt. We still had an opportunity to – that was fourth-and-long, a long way to go, and we gave it up.”

Had a delay-of-game penalty been called, Tucker, who beat the Lions with a 61-yard field goal at Ford Field in 2013, would have had a 71-yard try for the game-winner.

“That was awesome,” Tucker said. “It’s like deja vu all over again. I love Detroit. I’m thinking about getting a place here.” 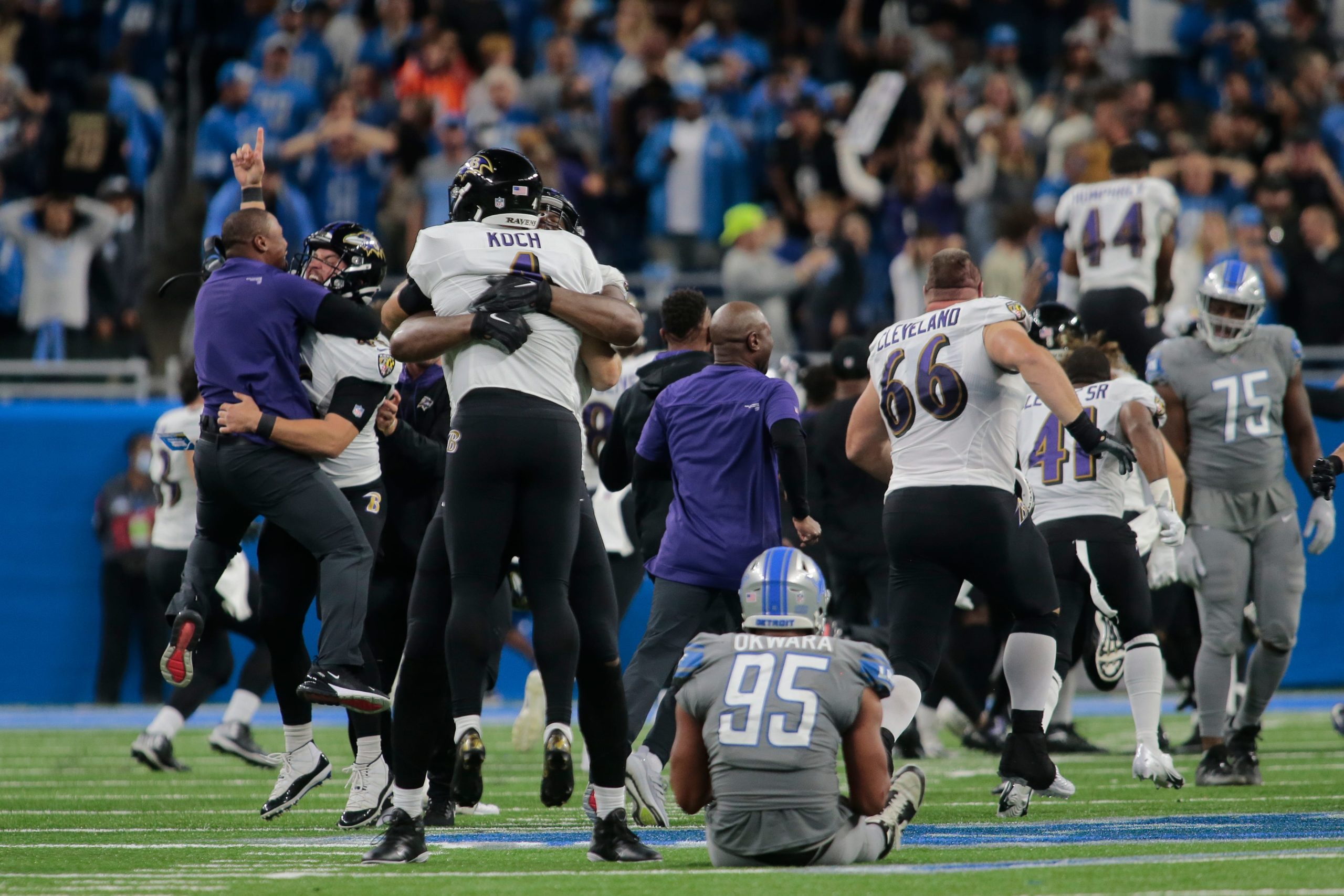 Jackson, who entered the game third in the NFL in rushing, finished with 58 yards rushing on seven carries as Lion’s defensive front routinely hemmed him in the pocket. He had one long run, a 31-yarder in the first half, and the Ravens finished with 116 yards rushing, about 100 below their season average.

Jared Goff was 22 of 30 passing for 217 yards for the Lions, who got second-half rushing touchdowns from D’Andre Swift and Jamaal Williams after they were held scoreless in the first half.

The Lions trailed 10-0 at halftime and were lucky not to be down by more.

Marquise Brown dropped three would-be touchdowns pass in the first half – two on one possession – and the usually-reliable Tucker missed a 49-yard field goal.

Baltimore scored all 10 of its first-half points in the second quarter, on a 39-yard Tucker field goal and a 19-yard Jackson touchdown pass to Devin Duvernay.

Duvernay’s touchdown came eight plays after Jerry Jacobs was called for illegally running out of bounds to avoid a block on a punt, which nullified a Duvernay fumble that the Lions recovered at the Baltimore 23.

Jackson completed 16 of 31 passes for 287 yards with one touchdown and one interception for the Ravens (2-1).

Swift had 107 yards from scrimmage, including 60 yards receiving on seven receptions, for the Lions.

“It’s like I told them, I think if you really want a sharpened sword, you want something elite, you got to put it under a lot of heat and a lot of pressure, and that’s what we’re under right now,” Campbell said. “And I think we’re going to come out the other end pretty good out of this. We just can’t get discouraged and we can’t stop continuing to believe and fight. Because I see where it’s going. I can see it. I feel like things became a little more clear today and I love the grit of this fricking team, I do.”