New Skincare Routine Before My Wedding Made My Skin Glow: How I Did It 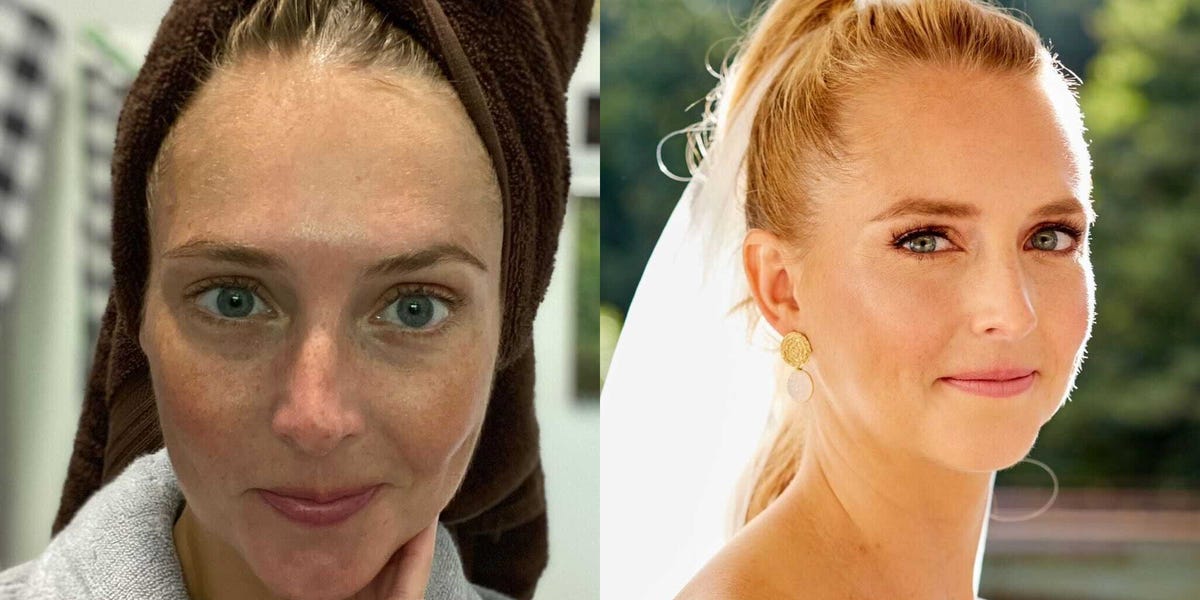 About a month before my wedding, I journeyed to three cosmetic stores in my Brooklyn neighborhood to see what each recommended to reduce fine lines and redness, and to help my skin glow.

I am not someone with a skincare routine.

I wash my face and moisturize once a day with whatever’s sitting around, whether it’s my partner’s face wash, a hotel body lotion, or a sample I’ve been mailed. For 34 years, my skin hasn’t protested much.

But leading up to my wedding in early September, I wondered if adopting even the simplest of routines would contribute to the big-day glow. It couldn’t hurt to try.

I visited three cosmetic stores to collect their recommendations before making purchases.

At Sephora, I met Cory, who, like all pros I talked to, recommended (at least) a face wash, serum, and moisturizer. The specific ingredients they all emphasized varied.

Cory said First-Aid Beauty’s Face Cleanser ($22) would help decrease inflammation and redness. It has ingredients like aloe to soothe skin and an antioxidant mix including licorice root white tea extracts to protect the skin from environmental stressors. In New York City, there are a lot of them.

I tested it on my hands in a sink, and it felt creamy and slightly foamy.

I’ve never used a serum, but Cory said this one with vitamin C would get me glowing.

The point of a serum, which goes on after cleansing, can be to brighten the skin, reduce fine lines, reduce blemishes, and  hydrate. Adding one step between cleansing and moisturizing seemed doable, but I wasn’t sure the Banana Bright product was worth the $65 price tag.

For a moisturizer, Cory suggested Dr. Jart+’s Ceramidin Cream, which is made for normal-to-dry skin and supposedly seals in moisture.

While not a must-do step, Cory said he and his customers love this avocado and retinol under-eye cream to dab on before bed.

The avocado in the mask is intended to help soothe skin conditions while the retinol “irons out” fine lines by boosting the skin’s natural collagen production, Cory said. The retinol in this product is “encapsulated,” too, he said, meaning it’s a sort of extended-release formula that continues to work magic throughout the night.

I was sold and bought the “Glow Recipe” mask for $42, but nothing else, right away.

My next stop was Credo, billed as “the largest clean beauty store.”

Here I met Jason, who also recommended a cleanser, serum, and moisturizer.

Jason directed me to a line of seaweed products which have vitamins that supposedly help with “firming and elasticity.”

He recommended the Osea’s Ocean Cleansing Mudd ($48) as a cleanser. For a serum, he pointed to  Osea’s $88 hyaluronic serum, which is intended to help the skin retain water. Jason said the serum is popular with supermodels because it helps them look refreshed even after a night of little sleep and partying.

As someone who intended to have just as much fun at my rehearsal dinner as my wedding, that was appealing. But the price tag was not.

Jason also laid out a few moisturizing options, including a $48 oil that Victoria Beckham supposedly likes. For my glow, a $95 Vitamin C mask that you apply for 20 minutes a few times a week.

I preferred the idea of getting my vitamin C fix daily through a serum, like the one at Sephora, instead.

My third and final stop was Aesop, which, unlike the other stores that carry a variety of brands, strictly sells Aesop products.

Here I met Tyler, who suggested I use a $34 facial cleansing “milk,” which is “exceptionally gentle” and “enhanced with botanicals renowned for their soothing properties.”

When I tested it, it didn’t foam, but Tyler said foaming doesn’t indicate how well it’s working.

Tyler was the only one who recommended a toner, which preps the skin for the next step and just feels good. He keeps his in the fridge to make it extra cool.

He recommended the B & Tea Balancing Toner for $35 and a $75 serum that’s made with antioxidants and aloe vera to hydrate and soften the skin. I forgot to note which moisturizer he chose.

I left Aesop empty-handed and confused about how I would decide between all the products and ingredients I was introduced to.

I ended up returning to Sephora to purchase the recommended cleanser, vitamin C serum, and cream.

I decided to go all in on Sephora since the products were reasonably priced, and I liked how each one addressed one of my goals: The cleanser could reduce redness, the serum would give me a glow, and the cream and under-eye could help smooth fine lines.

I noticed a difference right away.

Mostly, I felt glamorous using “real” skincare products and did feel like my skin was bouncier and better moisturized.

The serum was my favorite. It smelled delightful and made my skin glow.

I had my makeup trial a few days after I began using the products, and my makeup artist said my skin was well-hydrated.

She, like others, also mentioned how tan I looked. I did spend a lot of time in the sun over the summer, but I think the serum enhanced it.

A couple weeks into my mostly consistent routine, my skin remained bright and smooth.

I did learn some lessons: For one, it was important to put on the face serum before body lotion so that I didn’t accidentally smear lotion on my face with the serum.

It was also tough to break old habits. At least once while showering after a swim at the gym, I mindlessly lathered my face with the generic soap in the stall — even though I’d brought my “fancy” face wash along.

I also realized why I hate washing my face at night. The only time I did, the day of the makeup trial, soapy water ran all down my elbows, soaked parts of my shirt and pants, and dripped all over the floor.

I much prefer the once-a-day wash in the shower when everything’s already wet.

Even indoors toward the end of the night under bright lighting, my skin looked luminous.

Since the wedding three weeks ago, I haven’t kept up the routine.

That’s because I lost two out of the three products.

I made the age-old mistake of not double-checking the hotel room when checking out of our wedding hotel, and had to leave the face wash at our honeymoon hotel since we hopped a flight back home after taking the train there.

I’m tempted, though, to buy the vitamin C serum again. I miss the smell and that part of the routine. But for now, I’ll rely on newlywed bliss for a glow.

Previous articleCovid could be over in a year with ‘return to normal’, vaccine boss predicts
Next articleI’ve lived on a diet of Super Noodles and Oatabix with hot milk for 22 years due to rare condition