In his horror movies and TV shows, Mike Flanagan has adapted the work of authors ranging from Shirley Jackson to Henry James to Stephen King. His new original Netflix show also boasts literary inspiration and it’s not just any book.

Scripture and beliefs from the Bible share screen time with man and monster alike in “Midnight Mass” (streaming Friday), a Halloween-ready, seven-episode limited series and the latest creepy Flanagan creation to binge alongside “The Haunting of Hill House” and “The Haunting of Bly Manor.”

This exploration of religion and addiction “was always particularly special to me because it’s been so interwoven into my life and my childhood,” Flanagan says.

Classic horror movies:From ‘The Shining’ to ‘The Birds,’ 25 movies to watch before you DIIIIIIIIIIIIE

“Mass” centers on the small community of Crockett Island, where Riley Flynn (Zach Gilford) returns home a disgraced black sheep. Raised as a believer, Riley had his life derailed in a drunk-driving accident that killed a young woman – an incident that sent him to jail for four years and also took away his faith.

Riley reconnects with his pregnant childhood love Erin (Kate Siegel), another pariah among the locals. Riley’s return also coincides with the arrival of a mysterious and captivating new priest, Father Paul (Hamish Linklater). Masses are sparsely attended, but after a rash of miracles and supernatural instances, a religious revival takes hold, and Riley, Erin, Sheriff Hassan (Rahul Kohli) and others investigate the darkness that seems to be enveloping the island.

The Haunting of Bly Manor’:How the creepy Netflix show balances love and ghosts

The concept for “Mass” was born from Flanagan’s experience as a Catholic altar boy struck by “the transubstantiation of the bread and wine into the body and blood of Jesus,” he says. “We were told we were eating flesh and drinking blood in order to achieve eternal life.” And as a kid fascinated by horror, “I just always felt like the handshake between these two concepts was so clear.”

Ultimately “Mass” grew to become “a really wonderful opportunity for me to talk about things that are incredibly important to me: sobriety and faith and the corrupting influence of fundamentalism on belief systems,” says Flanagan, who’s struggled with alcoholism in his life and is now three years sober.

With Riley, tormented nightly by the chilling specter of the life he took, Flanagan crafted a man representing forgiveness even though he’s done something some might find unforgivable. He also symbolizes the deepest fear Flanagan ever had about his own drinking, that instead of getting drunk and dying in an accident, “I would kill someone else and live and have to reconcile that,” he says.

Gilford could relate to Riley’s newfound atheism: Raised Christian and Jewish, Gilford recalls thinking, “You guys believe all this?!” when he was a 7-year-old in synagogue. “He was a very faith-driven person and then had a traumatic experience that was his fault,” Gilford says of his character. “And that made him question everything because if all these things I believe are true, why would this ever happen?”

Father Paul, who tries to bond with the reluctant Riley and even starts a local AA group for him, was designed to be a parallel to Gilford’s character. “He wants to bring miracles and health and goodness, and then his motives ultimately are revealed to be very, very personal and lovely,” Flanagan says. “It’s just that the methods by which he was kind of coerced into this took on a life of their own.”

Father Paul tells Riley that “the only person who isn’t forgiving you for the sins of your past or the sins of your present is you,” yet “he’s sort of talking to himself at the same time,” says Linklater, whose mother was agnostic but his grandmother “stole me away from my mom in the dead of night when I was a little baby and had me secretly baptized into the Episcopalian church.”

When Riley comes back, Erin lives “a do-unto-others moment. She’s able to give him the warmth that she was denied from the town,” says Siegel, who wanted her role “to be a human who makes mistakes and still does her best and to represent the opposite of the deities and the angels and the priests and the religious routine of mass.”

Flanagan always loved the Bible’s parables, stories meant “to help you learn how to live your life a certain way, to teach you something about what it means to be alive and to hopefully encourage to live your life with more forgiveness and kindness.” And in creating his own version of that, Flanagan cleverly echoed the tome’s structure with his seven “Midnight Mass” chapters.

“You have your first act, your Genesis; your Psalms, your points where everything is up and where the characters are kind of at their best; you have Lamentations, the moment where you pull the characters down and you rip everything away from them only to bring in a new covenant,” Flanagan explains. “As a parable, it felt like a great chance to kind of go back and make this as biblical as we can.” 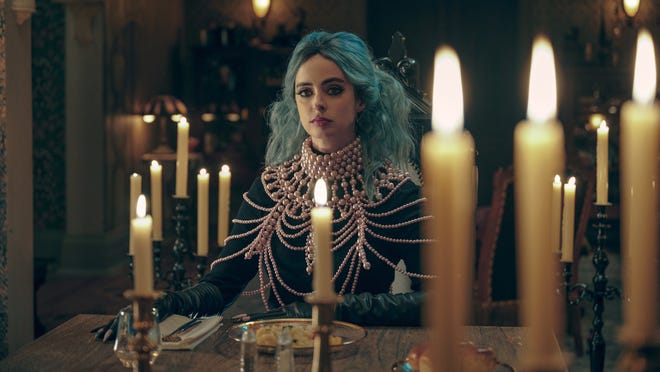