New Alert On The Facebook Windmill Ad Scam! Here’s Everything You Need To Know

By Amy Comfi
September 25, 2021
In
NewsTechnology

Facebook serves up millions of ads a day. Although the company claims it is doing everything it can to stop scams, there are times when nefarious companies make it through the security checkpoints.

One case in point is something we’ve been seeing A LOT of lately. Beware, it’s not real. At best, you’ll get a cheap knockoff of the real thing, and worst, you’ll be out your 50 bucks. 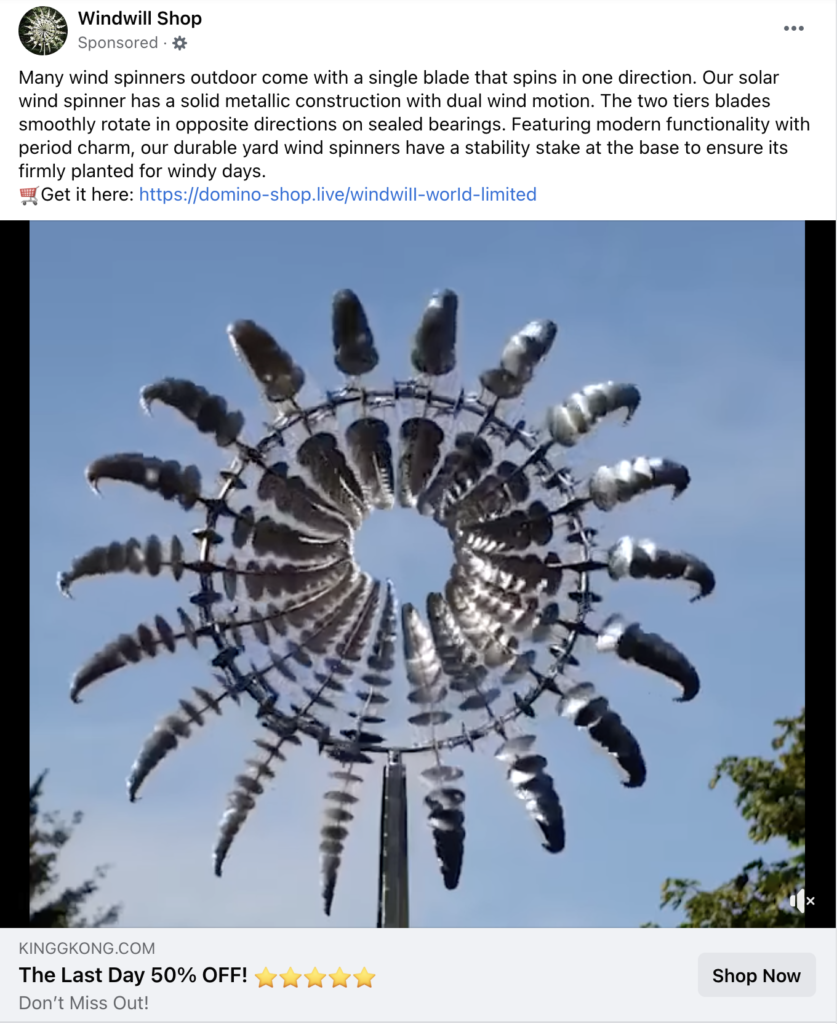 The ads are all pretty much the same. They feature a mesmerizing video of a really cool looking windmill sculpture and usually have a blurb claiming the company is going out of business and you only have a limited time to get a great deal on its remaining inventory:

“Hey dear, we are sad to announce that we are closing… 😔 This recession has hit our business hard, and unfortunately, we have no choice but to close down our shop.🎵 😢It’s a sad day for us here at Rise & Conquer, but we are going out with an incredible sale. Metal Windmills are being sold off at 78% Off If you want to get something from our store before we close 🔥Get Yours”

Click on the comments of almost any of these ads and you’ll see we’re not alone in our ability to spot this obvious scam. All over the world, posters are posting negative comments calling the ad deceitful.

After scrolling through our Facebook feeds for an hour, we discovered 11 variations of the same fake ad. They have account names like “FullHouse,” Windmill Shop”, “Emily Chidster Photography,” and “Natuma.” Often the scammers are so lazy, they don’t even change the name of the company in the blurb to the name on the account.

There is no question the video and the design of the windmill is very cool. Who wouldn’t want something like this in their garden? According to some commenters, if they actually receive a product at all, it’s a cheap-looking, tiny version of the sculpture shown in the video.

The real sculpture is a work by artist Anthony Howe called ”Zavion.” His website has photos it and a number of his other stunning metal works, and at the top of his page, he’s recently added the following disclaimer: “UNFORTUNATELY A CHINESE COMPANY IS OFFERING CHEAP COPIES OF SEVERAL OF MY WORKS ON AMAZON, THE WEB, AND MULTIPLE SOCIAL MEDIA PLATFORMS. DO NOT GIVE THEM OR PAYPAL YOUR MONEY – YOU WILL NOT RECEIVE A COPY.”

Howe posted a similar message on Facebook. Anthony Howe pointed this out: It appears that knocks are being sold both on Amazon and elsewhere.

Although the ad was reported by many Facebook users who recognized the scam, Facebook appears to have had difficulty getting the ads removed from its platform. The phony ads continue being served up by Facebook, probably by millions.

In general, it’s a good idea to always do an independent search for a product in an ad on social media from a company you don’t recognize. There are many legitimate small businesses selling their products. A quick Google search will reveal the difference between the genuine and the fake.

It’s also a good idea to always use a credit card for web purchases if you can. You have the protection of the credit card company for your consumer rights. If you PayPal it, it’s like wire the money via Western Union, it’s as good as gone and you stand little chance of getting it back if you’ve been scammed.