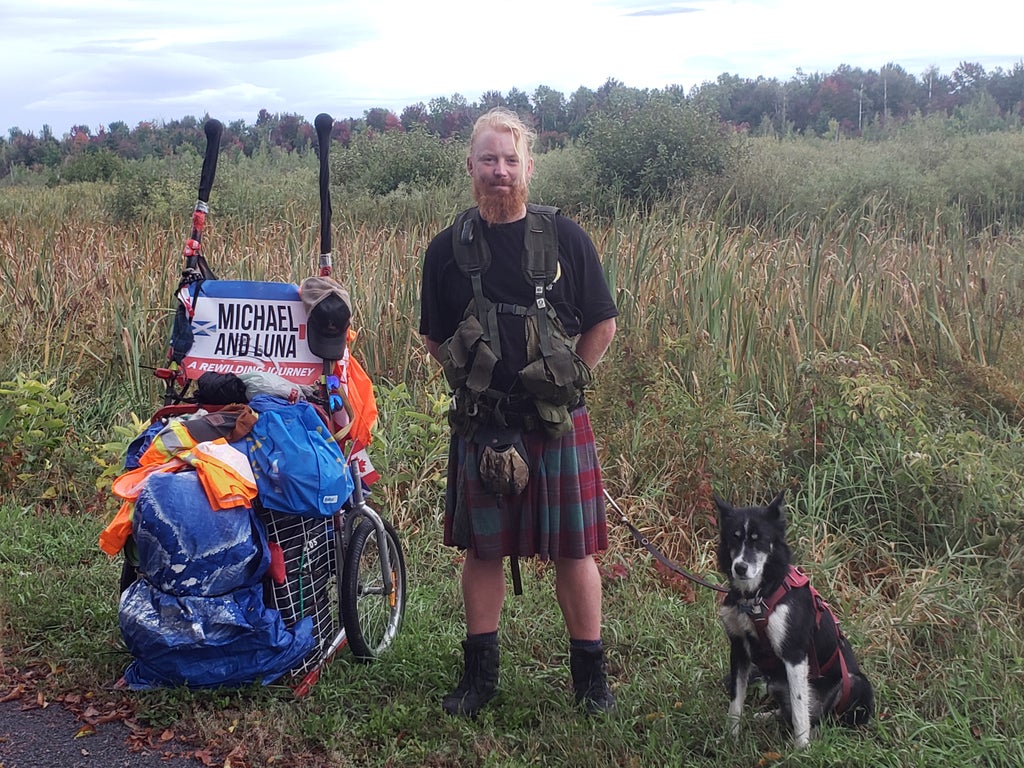 An adventurer is on track to complete a 5,000-mile walk across Canada to raise funds for a Scottish rewilding charity.

Michael Yellowlees set off on the mammoth adventure in March wearing a kilt and carrying a few items in a handcart, including a guitar.

The 32-year-old musician, from Dunkeld in Perthshire, is walking from the shores of the Pacific Ocean to the east coast of Newfoundland on the edge of the North Atlantic with his pet dog, Luna, an Alaskan husky, by his side.

Inspired by a trek in the Scottish Highlands three years ago, Mr Yellowlees decided to embark on the journey to raise money for Trees for Life.

The charity has a mission to rewild the Scottish Highlands.

Speaking about the Highlands, Mr Yellowlees said: “It is a beautiful landscape, but with a strong sense of sadness because of the absence of woodland, wildlife and people.

“So I decided, then, to walk across the great wildernesses of Canada to raise funds for Trees for Life and its work to restore Scotland’s Caledonian Forest, at a time when the world is on high alert over climate chaos and biodiversity loss.”

The keen walker has shared some of his experiences so far, including encountering black bears and hearing wolves howl at night.

He also spoke of a moment when he lost Luna after she jumped out of a canoe during a trip in the waterway section of the Great Canada Trail in Northern Ontario.

“I was totally distraught,” Mr Yellowlees said. “For months, we had been best friends and had looked after one another.”

The warmth of the people has been amazing

Mr Yellowlees met with locals who helped him search for his beloved pet and travel companion and after a week of looking, Luna was found.

“Just as I was giving up all hope, Luna appeared like an apparition,” he said, “strolling casually back as though nothing had happened – although she had lost some weight.”

Mr Yellowlees added: “The warmth of the people has been amazing. In every town and village people have offered me food, shelter and donations. So much kindness.

“I’ve been accompanied into towns and cities by marching pipe bands and interviewed by newspapers, radio and TV.”

Steve Micklewright, chief executive of Trees for Life, said: “We have been following Michael’s journey across Canada with awe and admiration.

“Restoring native habitats and wildlife to the Scottish Highlands is a big task that no one can do alone.

“But Michael’s extraordinary trek is proof of the power of the individual to make a difference.”

A family friend back in Perthshire, Bob Davidson, said: “It’s epic what he’s doing. I’ve known Michael since he was 10 years old.

“This is not a stroll in the park, but an 8,000-kilometre yomp at an incredible pace with Luna.

“He’s just an amazing guy, always has been and always will be. Hats off to him.”

Michael, a former pupil of Breadalbane Academy, is currently in Quebec, after trekking across British Columbia, Alberta, Saskatchewan, Manitoba and Ontario.

He expects to arrive at his final destination – the headland of Cape Spear in Newfoundland – in early November.

Previous articleFacebook outage: why did it crash and why did it take so long to fix?
Next articleFamily of Lauren ‘El’ Cho Desperate to Find Her Since Her Disappearance in June