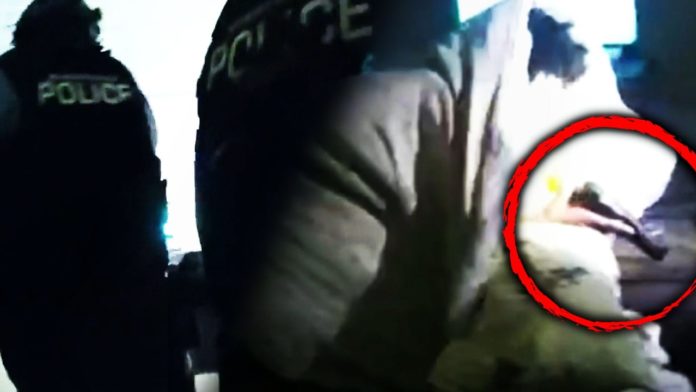 The entire incident is seconds long, but it ends when police say Locke emerged from under a blanket on a couch holding a gun.

That’s when an officer opened fire.

“It’s gut-wrenching. No matter the circumstances,” Minneapolis Mayor Jacob Frey said. “A man, Amir Locke, has lost his life. A family is grieving and has forever been changed regardless of the circumstances.”

The interim police chief says the SWAT team was executing a warrant for the St. Paul Police Department for a homicide investigation.

The officers obtained no-knock and knock warrants for the locations they were searching. The bodycam video shows officers using a key to open the apartment door, announce themselves, and enter.

“As they got close,” Interim Police Chief Amelia Huffman from the Minneapolis Police Department notes, “you can see along with an individual emerging from under the blanket, the barrel of a gun, which comes out from the blanket and becomes more fully exposed.”

“He did what any other law-abiding, permit-gun owner would do,” Crump said. “Strange people bust in this house, awaken him from his sleep. And he reached for his weapon, would he has a Second Amendment right to defend himself.”

Huffman says Locke was not named in the warrant, and it’s unclear if he is connected to the investigation in St. Paul. The St. Paul Police Department has not yet commented.

But the initial release of information is not acceptable for some community activists, including civil rights attorney Nekima Levy-Armstrong. They say they expected more changes to the Minneapolis Police Department following the death of George Floyd.

“You all had no business, agreeing to carry out a warrant,” Levy-Armstrong stressed. “And now you’re claiming that’s part of their investigation. You don’t know what. Why the hell did you all sign up to do this in the first place?”

The mayor says he is committed to transparency, and more information will be forthcoming.

“We want to get things right,” Frey said. “We want to gather the necessary evidence to make sure that we are not telling you something that is inaccurate now only to correct it a day later.”

Officials say their investigation into the incident continues.