Prince Harry and Duchess Meghan have crossed the country to visit New York.

The Duke and Duchess of Sussex, who currently reside in California, met with New York City Mayor Bill de Blasio at One World Observatory Thursday ahead of their appearance at Global Citizen Live on Saturday.

Meghan wore black from head to toe, including her slacks, blazer, turtleneck and heels. Harry coordinated in black with a tie and suit. Gov. Gov.

After taking in views from the 102nd floor of the observatory, Harry and Meghan made their way back down to pose for photos in front of the building, which stands near where the center’s former twin towers were destroyed by terrorists on Sept. 11, 2001.

They stopped at the nearby Sept. 11 memorial plaza. After looking out over the reflection pool, they visited the September 11 museum.

On Saturday, Harry, 37, and Meghan, 40, will speak at the Great Lawn of Central Park in New York City about the importance of achieving global vaccine equity, according to an event press release.

Global Citizen Live is a 24-hour event broadcast around the world in an effort “to unite the world to defend the planet and defeat poverty,” according to its website. With the COVID-19 pandemic gripping the world, they are calling on the G7 and European Union to share at least one billion COVID-19 vaccine doses immediately with those most in need.

Prince Harry previously attended Global Citizen’s “Vax Live: The Concert to Reunite the World” in May and gave an impassioned speech.

“This pandemic will not end unless we act collectively with an unprecedented commitment to our shared humanity,” He addressed thousands of healthcare workers and essential workers who had been vaccinated. He also stressed the importance of global vaccinations.

“None of us should be comfortable with thinking that we can be fine when so many others are suffering. In reality, and especially with this pandemic, when any suffer, we all suffer,” He added.

Harry and Meghan have embarked on additional philanthropic endeavors in the past year, marking milestone moments by supporting charities.

For their third anniversary in May, they announced they were working with World Central Kitchen to build a new community relief center in Mumbai, India, which is dealing with the devastating effects of COVID-19.

When Lilibet was born in June, in lieu of gifts, the couple asked well-wishers to support organizations working for women and girls including Girls Inc., Harvest Home, CAMFED or the Myna Mahila Foundation.

For Meghan’s 40th in August, she launched “40×40,” an initiative aimed at pushing for people around the world to dedicate 40 minutes to support women’s return to the workforce, many of whom have lost their jobs amid the pandemic.

The couple made Time’s 2021 list of the 100 most influential people and posed together for one of the outlet’s worldwide covers. In a feature story about the pair, José Andrés, Founder of World Central Kitchen, praised the couple for not staying silent and showing compassion for strangers.

Duchess Meghan, Beyoncé turn 40:How the stars are breaking stigmas on aging 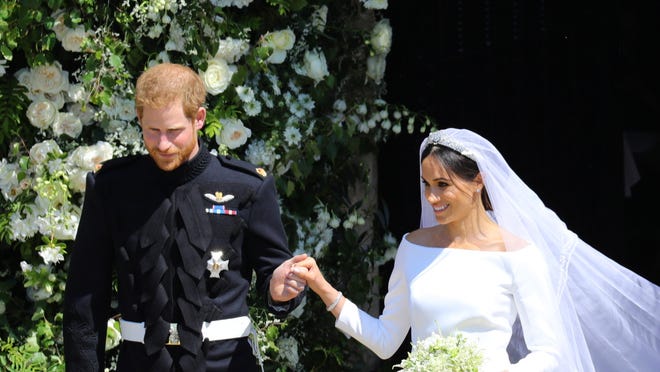