The drama-comedy film “Meeku Maathrame Cheptha” directed by Shammeer Sultan and produced by Vijay Deverakonda and Vardhan Deverakonda, has hit the big screens of the country on Friday, 1st of November 2019. 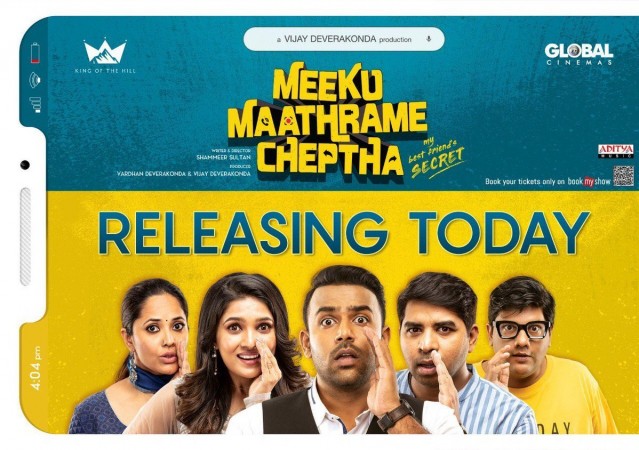 The film is no doubt giving a decent performance and with every show, the movie is getting a positive response from the audience. It even made a good box office collection among all the movies that hit the big sceeens this Friday.

The funny comedy tracks of the movie have become a source of entertainment for the audience and are being completely enjoyed by the people from different places, especially the youngsters. Also, the scenes between Tharun and Abhinav are known to be hysterically hilarious and have become the source of the laughter.

As the film aims to grab the attention of youngsters, the superstar Mahesh was made to reveal the Trailer of a laughing riot “Meeku Mathrame Chepta”. Recently, to do online promotion of the film, Vijay even released a HIP HOP promotional track.

Now, as the movie has hit the big screens, he turned himself into a ticket vendor at the box office counter and as a part of the promotions, sold tickets to the audience at Imax today in Hyderabad, Telangana.

Coming out as an out-n-out entertainer, the script of the movie is said to be written around several annoying and awkward situations of the protagonist Tharun Bhascker. Even after noting a positive buzz and a good reach amongst the target audience, the team of the movie seems to leave no stone unturned even in its promotion.