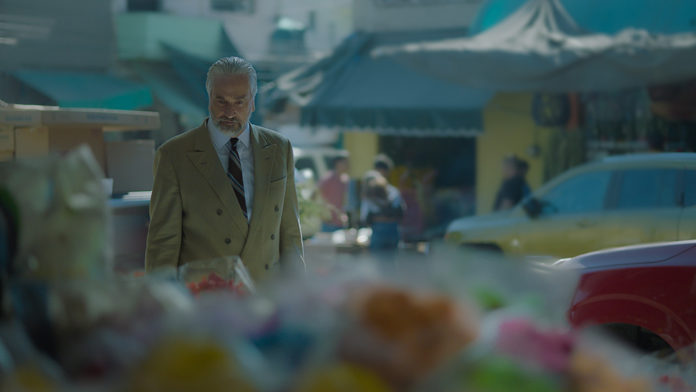 In Lorena Padilla’s “Martinez,” an aging office worker leads a solitary life centered on his own personal fulfillment, which generally leads to long sits in the park and becoming part of the landscape. Alone. Closed off from human contact.

“When I sent the script to Francisco Reyes, who plays Martinez, I only knew him over Skype. After he read it, the first thing he asked was, ‘who is this character, really?’ When I told him, it is my dad, he responded with ‘Ah, O.K., now I understand completely.’”

Padilla has made a career largely out of mining the intricacies of history and life in Mexico, even though she currently teaches screenwriting and directing at Southern Methodist University in Dallas, Texas. One of her most recent scripts was for director Rodrigo Reyes’ “499,” a sort of mixed documentary that follows a conquistador who finds himself in modern Mexico listening to the stories of those who have suffered violence and brutality in the land Cortes devoured nearly half a millennium ago.

Sold by Paris-based Luxbox, “Martinez” currently screens in the Guadalajara Festival’s pix-in-post showcase, Guadalajara Construye. At Guadalajara, Padilla ducked out of a screening of “Martinez” for a quick chat with Variety.

In Mexico, there seem to be a lot of short films and features being made about the situation of older people in this society. And these films are being made by young filmmakers. Why all the focus on old people?

I have lived and studied in the U.S. for a number of years and today I teach classes on filmmaking at Southern Methodist University. During this time, I’ve come to understand that we in Mexico have a very different relationship with those in society who are older. And that has been enhanced during the pandemic when we weren’t allowed to see our grandparents and it was being made very clear that they were the most at risk of COVID and we could even cause them to get sick. The generational differences and our judgement of how they live were smoothed over. I think younger people began to realize that looking at them is looking at us.

Where did the story and the character come from?

In the end, it is really an exploration of my relationship with my dad. You know, when I sent the script to Francisco Reyes, who plays Martinez, I only knew him over Skype. After he read it, the first thing he asked was, ‘who is this character, really?’ When I told him, it’s my dad, he responded with ‘Ah, O.K., now I understand completely.’ My dad is a very closed person, and I don’t think he is going to change, but he could. Martinez is a closed person, but he manages to open up in the course of the film. But I think about people who are getting older and isolate themselves. What happens to them? The death of Martinez’s neighbor was based on the true story of a woman in London who died and no one discovered her for two years. In the film, I shortened it from two years to six months because friends who read the script said that two years was not believable. But it’s the truth. Which is stranger than fiction, isn’t it? Saying all of that, I’d have to say that I am Martinez, too. You know how you start off talking about someone else and then discover that you are talking about yourself?

There are humorous elements in Martinez, a lot of scenes in which Martinez, the character, is relaxing along or taking care of himself alone and, of course, there is some conflict. How would you characterize Martinez, the film, in terms of genre, if that’s possible?

Is the film an exact representation of the script?

No, not at all. I enjoy destroying my scripts when I am directing, which is kind of strange because I’m a writer. I teach film directing at SMU and I basically tell my students: ‘This is how I direct.’ I start out with the script but by the time that we are on set, I know the story so well that I can tear it apart without changing the trajectory of the story. That also enables me to allow the actors to improvise as well as take advice from other people working on the set.