Jordana Brewster recently announced her engagement to Mason Morfit on Instagram. The heartwarming photo of the soon-to-be-married couple featured the caption, “JB soon to be JBM.” With the engagement came curiosity as to who exactly Morfit is.

Mason Morfit, Who Are You?

Morfit is an interesting, accomplished man. Currently, he’s the Chief Executive Officer and Chief Investment Officer at ValueAct Capital. Additionally, Morfit is also a partner and a member of the firm’s Management Committee. ValueAct Capital is a San Francisco-based investment company that works with some of the world’s largest institutional investors. According to the firm’s site, it manages more than $16 billion in its portfolios.

Before he founded ValueAct Capital, Morfit worked with large-name corporations. Morfit has served on the boards of companies such as Microsoft and C.R. Bard, Advanced Medical Optics (Immucor), Solexa and MSD Performance as well as Valeant Pharmaceuticals International.

Despite his busy life, Morfit still finds the time to support his college, Princeton University. Morfit currently serves as a member of the Advisory Council for Princeton’s Woodrow Wilson School of Public and International Affairs. Another thing Morfit and Brewster share is an Ivy League education. The Lethal Weapon star attended Yale University.

How did Jordana Brewster and Mason Morfit meet?

How does a CEO of an investment firm meet a well-known actress and model such as Jordana Brewster? According to the Fast & Furious star, Morfit was the type of person “who had stayed on my mind” even when they weren’t together. The duo initially met at lunch with mutual friends. Brewster remembers Morfit as “cute” and “charming,” leaving a lasting impression on her. “I enjoyed his sweet, self-deprecating humor,” She recalls. 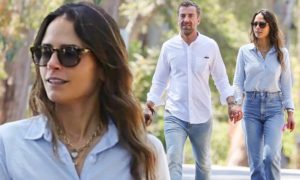 Things between Morfit and Brewster moved pretty quickly after Brewster’s divorce from her ex-husband Andrew Form. The actress recalls falling in love with Morfit just four days after she separated from Form. Although their friends encouraged them to slow down their relationship, Brewster was certain that they were meant for each other. Brewster reveals that her friends “didn’t know” things between her and Morfit were actually “13 years in the making.”

Brewster has dated a number of well-known celebrities before her engagement to Morfit. Brewster was a past partner to celebrities such as Mark Wahlberg, Jimmy Fallon and Derek Jeter. Brewster and Morfit seem to be in love.

Previous articleJustin Bieber Fans Curious! Did He Accidentally Reveal That Hailey Is Pregnant?
Next articleShannen Doherty Updates Fans On Her Stage 4 Cancer Battle